Whirlwind is a Secondary Barbarian skill unlocked at Level 20, doing damage to enemies in close proximity to the Barbarian.

It's a signature skill of the Barbarian.

Of the Barbarian people, the Tribe of Thunder was the first to draw upon the primal forces of the weather. Tornadoes would ravage their plains as summer turned to the harvest season. The shaman of the tribe would interpret the tornadoes as an omen of evil during times of peace, and as a harbinger of great victory during wartime. Observing the strength of the whirlwind, these Barbarians learned to emulate the swirling melange of the cyclone in their attacks. As time went on and the tribes intermingled, the ability to attack in the manner of the whirlwind was passed down to all of the Barbarian people.

Whether or not the tribe has survived the destruction of the Worldstone inside Mount arreat is unknown, but it's still true that using this technique, the Barbarian becomes a cyclone of death, killing any enemies around him with great ease.

The following is a very quick summary. See the Whirlwind rune effects page for a more thorough description of rune effects, or any of the individual rune pages for numbers, screenshots, blue quotes, and much more.

Everyone's favorite spinning, multi-hitting tornado of a skill returns in D3. Once the player activates the skill, the Barbarian starts spinning for a limited duration of time, damaging anything that comes into close proximity with the Barbarian. The Barbarian is able to move while this skill is active, making this skill very good for killing masses of monsters.

Just like the D2 skill, Whirlwind lands multiple hits to anything in the barbarian's path, and it can strike multiple monsters per use. The whirling graphic is much improved in D3, with the weapon visible tracking around in a circle, leaving a glowing light as it spins and pausing an instant when it makes contact with a hapless enemy. 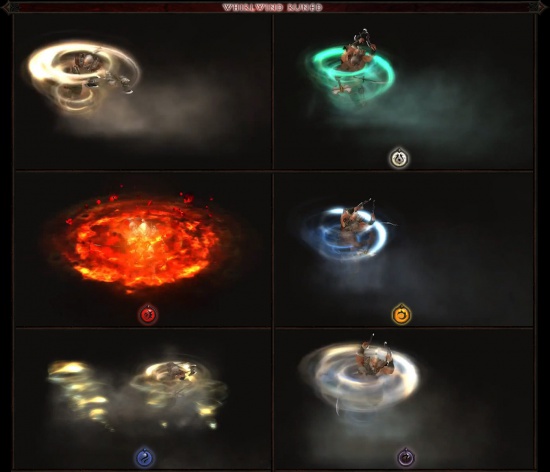 Two videos of Whirlwind in use can be seen below, courtesy of the DiabloInc You Tube channel.

The following Barbarian passives provide a benefit to Whirlwind, runed or not:

The following Barbarian passives provide a benefit to Blood Funnel:

Whirlwind debuted in Blizzard's WWI 2008 with the announcement of Diablo III, as a Tier 4 skill on the Berserker Skill Tree.

During the BlizzCon 2009 Diablo 3 panel, the development team showed off visual changes to the skill. With the creation of the Desert Dervish, who also use a form of whirlwind, the D3 Team found out that the Dune Dervish's whirlwind is much better looking than the Barbarian's. In order to rectify this, they improved the Whirlwind animation with more blur, and more Barbarian copies in it.

The team showed off the new Whirlwind for the Barbarian, with a demonstration of him slaughtering multiple farm animals with it. The new Whirlwind is much more intense and as the barbarian spins, dust and sand is seen being around him, also, the whirlwind seems more vicious, giving a feeling of "weight of the weapon + the speed of spinning = very hard hits" to the player.

At BlizzCon 2010, Whirlwind was one of the Barbarian's skills available in the Battle Arena. According to Flux, however, it might not be the best skill for PvP:[1]

To my surprise, about his least useful skill was Whirlwind. It was damaging, and I saw it used well a few times in short spins, but FSM help you if you tried to do a long WW in a crowded screen. The odds of getting stuck by a Slow Time or GotD, or both, or spinning into a wall, or just taking about fifty spell attacks on you way, were very high.

Skill tiers were removed for the July 2011 Press Event, allowing skills to unlock steadily from levels 1 to 30. Consequently, all skill levels were adjusted and Whirlwind became a level 22 skill.

This skill is an updated version of Diablo II's Barbarian skill Whirlwind, which also improved the Barbarian's Attack Rating.

Whirlwind can be seen in action on video here: