Rapid Fire is a Secondary Demon Hunter skill unlocked at Level 5. It does what it sounds like, enabling an extremely rapid firing rate that operates on an initial Hatred cost and a steady drain thereafter.

This is one of the Demon Hunter's best attacks against a single target, and a skill many fans find very fun to use. 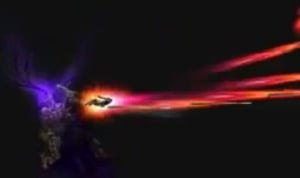 The Demon Hunter unleashes a steady stream of projectiles which skewer anything they hit. The arrows all have a streaking graphic, like tiny pointed meteors, which looks cool but can be dangerous as it may obscure incoming attacks.

See the Rapid Fire rune effects page for a more thorough description of rune effects, or any of the individual rune pages for numbers, screenshots, blue quotes, and much more.

The firing rate is based on your normal attack rate, so a Demon Hunter with faster bows, such as dual hand crossbows, will shoot more projectiles even more quickly with this skill, and consequently drain their Hatred that much more quickly.

The following Demon Hunter passives provide a benefit to Rapid Fire, runed or not:

Also, if using the Fire Support rune on Rapid Fire, then the Passive skill Ballistics will boost the rockets' damage by 50%

Rapid Fire was first seen at the July 2011 Press Event, where it was a level 24 skill. Unfortunately, no information about the skill's function was available.

Early in the Beta test, the skill was moved to a much lower level, to provide the Demon Hunter with a low level skill to deal higher damage to a few targets, which the class was lacking. Rapid Fire isn't quite an [AoE]] skill (though the High Velocity and Bombardment rune effects give it some capability on those lines), but it's very useful against a single or a few enemies. It is not well suited to using against larger groups since it's expensive and doesn't pierce, save somewhat with the aforementioned rune effects.

After the beta started in September 2011, Rapid Fire was changed to level 5. The skill system was once again overhauled for the Beta Patch 13, and Rapid Fire was classified as a Secondary skill (but stayed at level 5).

Rapid Fire can be seen in action on video here: