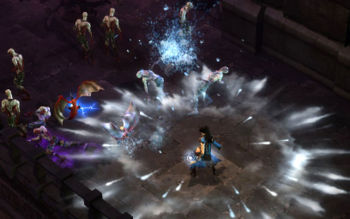 Frost Nova is a Defensive Wizard skill unlocked at Level 4, sending out a flash of severe frost, damaging and often slowing enemies.

This skill deals damage, but only just. The purpose of it is to freeze enemies in a defensive effort. The duration of the freeze is quite short, so it's really just a delay, and one the Wizard needs to react instantly to, either running or teleporting to safety, or else unleashing powerful attack magics at once.

The Wizard has learned some knowledge of the Zann Esu mage clan that first tried to foster her like it did the Diablo II Sorceress heroine, and improved on it. She has modified the staple Frost Nova to deal more damage and have a higher chance of hitting vital areas of opponents, freezing them in one spot.

Refer to the Frost Nova rune effects article for thorough descriptions of all five rune effects in this skill, including screenshots, videos, strategy tips, and other related information. 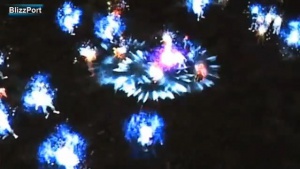 Frost Nova is pretty much the same skill it was in D2, but with vastly improved graphics. Instead of just a ring of frost, it now sends out a gaseous ring that's speckled with dozens of shooting, snowball-like projectiles. As it was in D2, the skill is not very damaging and is best used for defensive purposes, a fact that's reinforced by the eternity of a 12 second cool down it's saddled with.

However, its is improved over the D2 version in several ways. It now has a pretty good chance of freezing the enemy rather than just chilling it, and it casts very quickly; so fast you can hardly even see the ring expanding out. It looked much faster and less detailed in the BlizzCon 2009 build than it has in previous screenshots, which I found disappointing.

The following Wizard passives provide a benefit to Frost Nova, runed or not:

Frost Nova was first shown at BlizzCon 2008 when the Wizard debuted, on the Storm Skill Tree at Tier II. It was changed slightly in appearance at BlizzCon 2009, in that the animation and graphics were sped up, possibly as a balancing change.

Frost Nova was one of the Wizard's starting skills at BlizzCon 2010, and Flux found it to be very useful, indeed almost overpowered:[1]

The nova doesn’t just chill, it freezes the non-bosses, and for more than a second, which I was surprised to see at just level one. Presumably chill time is reduced on higher difficulty levels, as it was in D2, but this was a very powerful spell for so low in the skill tree.

Skill tiers were removed for the July 2011 Press Event, allowing skills to unlock steadily from levels 1 to 30. Consequently, all skill levels were adjusted and Frost Nova became a level 1 skill.

Frost Nova was moved to level 2 during the beta, and Flux explained how to use it correctly:[2]

Besides the cooldown time, Frost Nova is limited by having a fairly short range. You have to be in the middle of a big pack or right at the edge in order to hit more than just a few enemies with this one, and the freeze time is just 4 seconds. Like most of Diablo III’s defensive skills it’s not a “cast it and relax” type thing. You’ve got to drop this one and immediately continue your attack with other skills, since those monsters aren’t going to hold still for long.

With the Patch 13 changes, it was classified as a Defensive skill and moved to level 4.

See the Wizard skill archive for more details on previous versions of Frost Nova and other Wizard skills.

This skill is an updated version of Diablo II's Sorceress skill Frost Nova with improved graphics.

Frost Nova can be seen in action on video here: