This page archives a skill that was removed during the development. This is for future curiosity and reference. This page is not to be updated with current info; see the Monk Skills article for the latest information.

Lethal Decoy is a Spirit Spending Monk skill unlocked at Level 7. The Monk summons a holy image of himself with a magnetic personality. 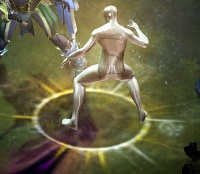 The Monk expends spirit energy to summon a holy decoy of himself, which attracts monsters and deals damage.

The following is a very quick list. See the Lethal Decoy rune effects page for a more thorough summary of rune effects, or any of the individual rune pages for numbers, screenshots, blue quotes, and much more.

This skill first appeared at BlizzCon 2010. The Monk creates an exact duplicate of him or her, that looks like a shiny golden statue. Monsters are drawn to it and will attack the decoy, though it does not take apparent damage or react to attacks or hits. 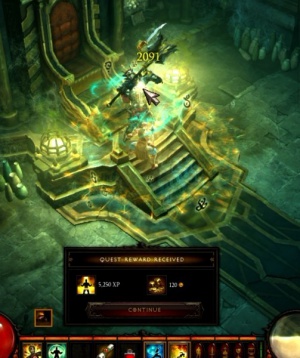 Only one of the runestone effects has yet been seen, Lethal Combatant, which looks like the same sort of statue, but with dark gray exterior.

The Monk's skills underwent numerous tweaks and changes during the Diablo III Beta. Lethal Decoy increased greatly in damage, while the duration (the time the decoy lasted between cast and explosion) was lowered. This had the effect of changing the skill from a decoy to an attack that had very high potential damage. As you can see in the image to the right, it was capable of dealing over 2000 damage and killing the Skeleton King in a single shot; this from a Clvl 13, well-equipped Monk.

Lethal Decoy can be seen in numerous gameplay videos from the Diablo III beta. The golden shining statue appearance of the skill has prompted numerous, "And the Academy Award goes to..." jokes from fans.