Mantras are buffing skills possessed by the Monk. They add a helpful bonus of some sort to the Monk and his allies, or debuff his enemies, for some set amount of time after being cast.

Mantras cost Spirit to cast, and each mantra can be recast at any time after the cooldown ends, refreshing them before the duration expires. Monk players may wish to switch between two or more mantras (or rune effects) as the situation requires.

Mantras were known as Auras during most of Diablo III's development, with the name only changed in late-2011, shortly before the Diablo 3 Beta test began.

The Monk did not have any Mantras when the character debuted at Blizzcon 2009. They were first revealed (as Auras) by Jay Wilson in October 2009[1], and were first playable in the Blizzcon 2010 demo. There are four Mantras as of the Diablo III beta build, and that number is not expected to change in the final game.

Disciplined monks, with the help of a [[Mantra]], can make the force of their [[spirit]] manifest, projecting it outward. Only one Mantra can be active at a single time.

Mantras are not used like Auras were in Diablo II, which became active as soon as they were selected to the right mouse button, and remained in effect until the skill was changed. Diablo III's Mantras work more like Diablo II's Warcries; the Monk casts a Mantra which activates it for some set duration (generally 120 seconds).

Like Warcries (known as Shouts in Diablo III) Mantras can be recast while still active. Typically they have a 30 second cooldown after they are activated, and can be recast any time after that. This may be desirable for more than resetting the duration, since some mantras provide double the bonus effect for several seconds after they are first cast.

Monks can use more than one Mantra, switching between them as appropriate.

Like all skills, each Mantra has five different runestone effects, many of which completely change the skill's function.

Mantras are best assigned to the 1-4 keys, and can then be cast at any time (past the cooldown) by simply clicking the button.

It was long assumed that there would not be Auras in Diablo 3, since they were a Paladin skill and that class was not returning in Diablo III.

the Paladin is not returning as a playable character. That presumption was shaken by Jay Wilson during an October 2009 interview with Diii.net. [2]

Diii.net: We saw 8 Monk skills at BlizzCon. All were melee offensive or defensive. Can you give us some idea of what other skills the Monk will have at his disposal?
Jay Wilson: Most of the Monk's skills will focus on combat skills and attacks, along with his various escape skills. And we talked at Blizzcon that we're likely to put some defensive and supportive abilities on him. Possibly Auras. We've not done the next round of skills on him yet so we’re not exactly sure.

Diii.net: Really? That's handy, since I was also going to ask if he'd have any co-op or party-boosting skills.
Jay Wilson: We definitely want to do that with one class. Whether or not it's the Monk hasn't yet been decided. The Monk does seem to be the logical choice. The only reason we might not do with him is that he's too logical. 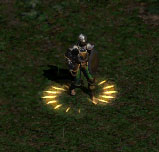 Auras are used by the Diablo 2 Paladin. They are also granted by some special weapons, and can therefore be used by other classes. Auras provide a passive buff to the player (and usually to others in the party) or they functions as a debuff on all enemies within the aura's range. Only the Paladin, who has 20 of them, possess auras as skills, though a few special items provide an aura when equipped. Paladins can only keep one aura active at a time, though multiple different types of auras can stack, whether they come from multiple Paladins, multiple items with an aura on them, or some combination of the two.

Various screens of Mantras in use in Diablo III.