Impenetrable Defense is a Tier 1 skill from the Monk's Skill Tree C, walling off ranged attacks, and enabling the Monk to dodge very efficiently.

The Monk swings his staff so fast and with such precision he is able to deflect any incoming missiles, and dodge incoming attacks. 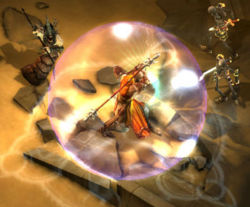 Swinging along...
This one was not needed in the BlizzCon 2009 demo, since the Monk was quite overpowered in combat. I didn't experiment with his "dodge" ability, which is mentioned as a by product of several skills, since it was so much more fun just to blast everything with his offense. Plus, testing time is always limited, even in the press room. I would have made sure to try the other element of this skill, the "rebounds enemy ranged attacks," but there were zero monster archers and virtually no projectile spell casters in the BlizzCon build.

Fallen Shaman were fairly common in the surface desert areas, but they seldom hurled Fireballs (they were quite quick to resurrect dead Imps,though). There were lots of Dark Cultists, but only the foot soldiers and the "transform into a demon" types. None of the spell castinging mage types. And while there were some weird insect-like mages in the dungeons below the desert, they were infrequently encountered and were always behind a mob of melee enemies, so I never had time to stop beating down the foot soldiers just to try to reflect the (easily avoided) projectiles.

The spell does have a cool animation, at least. The Monk stands still and does a simple staff twirl, while a large rune appears below his feet.

A video of Impenetrable Defensecan be seen below, courtesy of the DiabloInc You Tube channel.

This skill was first shown at BlizzCon 2009 as one of the originals when the Monk was unveiled. It was slightly modified and renamed to Serenity in the game demo that was presented at BlizzCon 2010.