Dark Vessels are human cultists that allow themselves be overtaken by a demonic presence, distorting them to a dangerous vaguely human-looking creature of great power. The Vessel itself is harmless until it turns into an Activated Vessel (Thrall).

These human mages are commonly found standing motionless, holding staves, amidst various other types of "Dark" enemies. Vessels are harmless in their human form, but become very dangerous melee fighters if they manage to pull a demonic entity into themselves. In that form they are known as Activated Vessels, and are ferocious fighters. 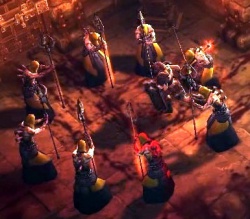 Superunique versions of Dark Vessel have a chance of spawning in the following areas:

Dark Vessels look a bit like Dark Cultists, and probably shares the background story of regular Cultists. Humans that in despair have turned to the Prime Evils for strength and power, and in the end are corrupted and used as cheap tools of the powerful demons.

The spikes that pokes out of their backs are called "Teeth of Diablo", and are indeed a metal spike inserted into the flesh of the willing recipient. The spike does not seem to cause internal haemorrhaging but instead some sort of perverse corruption of both soul and body.

The cultists were performing a strange ritual when I saw them, today. One of their number stood soundlessly while others thrust long spikes deep into his spine. He did not perish, and I believe that he may have even been darkly empowered from the implantation, though such terrible magic is foreign to me. -- Abd al-Hazir

Dark Vessels were among the first monsters seen for Diablo 3, as they were presented in the June WWI 2008 gameplay video. They did not change during the rest of 2008.