The Halls of Agony is three story set of dungeons directly underneath Leoric's Manor in the Highlands of Khanduras. The first two levels are separated by the Highlands Passage and the Cursed Hold. This area forms part of the torture chambers of the Mad King (Leoric).

The corridors link prisoner cells and torture chambers still with torture devices in them. Some have their last victim, or what is left of them, strapped in. This place is full of hell fire and damnation. 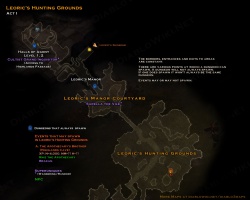 Areas and Dungeons within Halls of Agony[edit | edit source]

The following Bounties can appear in Halls of Agony when playing in Adventure Mode:

The following Superunique monsters can but might not always appear in Halls of Agony:

Waypoints are special plates on the ground that form a network of jump points allowing players to instantly teleport between them. The nearest waypoint for Halls of Agony appears on level 2 and level 3.

Halls of Agony is in some way involved in the following achievement(s).