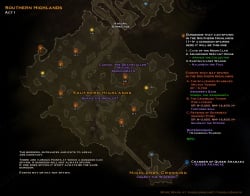 Highlands Crossing is the area that bridges Wortham and its Caverns of Araneae and the Southern Highlands. It's a tiny area but boasts a Waypoint and very often a shrine tucked in on the left of the bridge so don't just hare across the bridge to Highlands or you'll miss it.

This is the first area you'll encounter the Withermoth.

Waypoints are special plates on the ground that form a network of jump points allowing players to instantly teleport between them. The nearest waypoint for Highlands Crossing appears in the same place, just right of the bridge. It's the infamous rainbow waypoint, 'ground zero' of the Art controversy that kicked off not long after Blizzard revealed Diablo III.

Highlands Crossing is in some way involved in the following achievement(s).