Alcarnus is a desert town in the Borderlands in Act II. It has been overrun by Cultists who have imprisoned the locals in cages. Whilst on the quest City of Blood there is a bonus Achievement (Hero of Alcarnus) to be earned by freeing the locals. 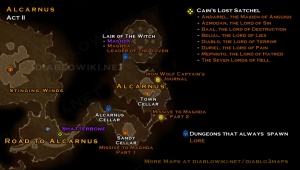 The following Superunique monsters can but might not always appear in Alcarnus:

Waypoints are special plates on the ground that form a network of jump points allowing players to instantly teleport between them. The nearest waypoint for Alcarnus appears in the Road to Alcarnus.

Alcarnus is in some way involved in the following achievement(s).

400 years ago, precious ores were found in the Stinging Winds and the town of Alcarnus was quickly established as the centre of all mining in the area, with several other smaller settlements springing up in its wake.

Alcarnus was part of the BlizzCon 2009/GamesCom 2009 demo, in which the player was sent on a quest by Asheara to find out about the troubles of the city. On the way, there was also a bounty to be had from Husam.