Westmarch is a kingdom in the West, neighbouring Entsteig and Khanduras. The name could also refer to the Kingdom's capital, but if one looks closer to the Diablo II Manual, Duncraig seems to be the capital.

Westmarch is the main part of Act V and will be introduced to Diablo 3 with Reaper of Souls expansion pack due for release in 2014. 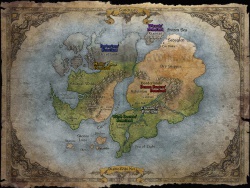