The Royal Crypts lay beneath level four of the Cathedral. It's a single levelled dungeon strewn with pots of ashes and sarcophagi. It's a fairly small level and always has the same layout. This is the last area before you encounter your first real boss, The Skeleton King. 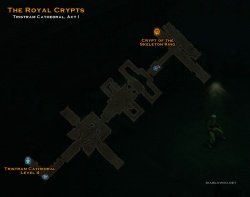 Events and Bounties in The Royal Crypts[edit | edit source]

The following Superunique monsters can but might not always appear in The Royal Crypts:

Waypoints are special plates on the ground that form a network of jump points allowing players to instantly teleport between them. The nearest waypoint for The Royal Crypts appears a short distance from the stairway down into it.

The Royal Crypts is in some way involved in the following achievement(s).