The Tomb of Sardar appears in the Dahlgur Oasis in Act II. It doesn't feature in any quests but does have an event, Sardar's Treasure for which there is no achievement.

The Tomb is however necessary to visit in order to get the Nooks and Crannies achievement and the lore collecting achievement Judge of Character as The Musings of Sardar can be found in a satchel here. 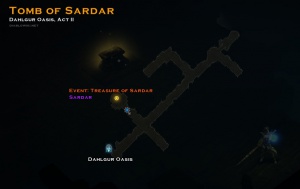 The following Superunique monsters can but might not always appear in Tomb of Sardar:

Waypoints are special plates on the ground that form a network of jump points allowing players to instantly teleport between them. The nearest waypoint for Tomb of Sardar appears at a random location in the area. There is also one in the Path to the Oasis which is a very short path always at the very bottom of the area.

Tomb of Sardar is in some way involved in the following achievement(s).