The Old Mill is a structure in The Fields of Misery of Act I.

It features in The Broken Blade quest which sees you fighting Nigel Cutthroat for a relic. It's at the Old Mill you first run into the Scoundrel, the follower you are able to hire to fight with you. 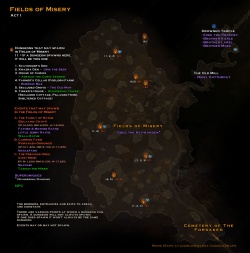 Location of The Old Mill

The following Superunique monsters can but might not always appear in The Old Mill:

The Old Mill is in some way involved in the following achievement(s).