The Chancellor's Tomb is located within Act I, underneath the Defiled Crypt in the Cemetery of the Forsaken.

It's a very small dungeon and always configured the same. It's only purpose is to house the king's crown for the quest the Shattered Crown and besides that it's not worth visiting. 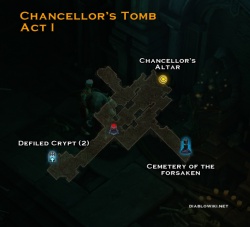 The following Superunique monsters can but might not always appear in Chancellor's Tomb: