The Revenant Soldier is a skeletal melee fighter type of undead, added to the game in the Reaper of Souls expansion pack. It can only be found in Act V, as well as randomly in Nephalem Rifts. It is classified as a Reaper. This monster is a an armored skeleton, found randomly and raised by the Summoner of the Dead. They can also be created from human NPC guards, when transformed by Death Maidens.

These undeads look very much like Revenant Shield Guards, except they lack a shield, fill a more offensive role, and have lower hit points [1].

Blizzard introduced the monster with some lore as part of the Westmarch Bestiary preview in November 2013:[2]

“I watched in horror as the guard was struck by the maiden’s magic. I heard the sound of his screams until his flesh had dissolved to nothing, and only his armor-clad skeleton remained, his jaw unhinged. Blue mist swirled around his bones, coalescing into new flesh. When at last I cut him down, the phantasmal flesh exploded, leaving only a pile of armor behind.” 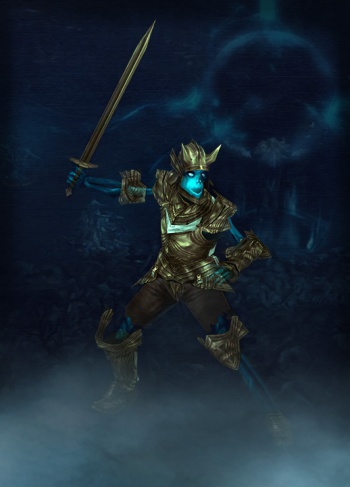 These superunique Revenant Soldiers can appear in the following areas: