The Revenant Shield Guard is a skeletal melee fighter type of undead, added to the game in the Reaper of Souls expansion pack. It can only be found in Act V, as well as randomly in Nephalem Rifts. It is classified as a Reaper. This monster is a an armored skeleton, found randomly and raised by the Summoner of the Dead.

They can also be created from human NPC guards, when transformed by Death Maidens. They are commonly found protecting Revenant Archers and look much like Revenant Soldiers, differentiated chiefly by their shield and by their higher hit points [1].

Blizzard introduced the monster with some lore as part of the Westmarch Bestiary preview in November 2013:[2]

“The revenant shield guards were once the personal guard of King Justinian IV. Appointed to the position for bravery and skill at arms, they accompanied the king at all times, resplendent in their ornate armor, wrought by the finest craftsmen in Westmarch. But most spectacular were their shields, which they unerringly employed in the protection of their king.” 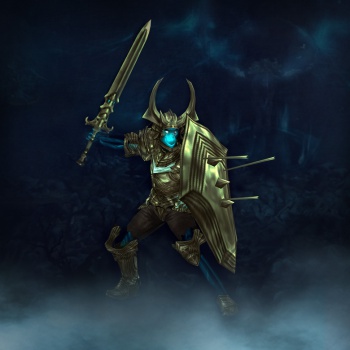 These Superunique Revenant Shield Guards can appear in the following areas: