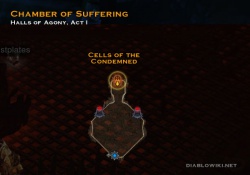 The Butcher (db) is a Superunique Demon and returns from Diablo I but this time as the final Boss of Act I. He appears in the Chamber of Suffering which is underneath the Halls of Agony which in turn is underneath Leoric's Manor in the Highlands of Khanduras.

The Butcher can also feature in a bounty called Kill the Butcher.

He's been upgraded in his downtime since Diablo I, although it is still a fairly straight-forward fight.

The Butcher has x different types of abilities:

In addition, there is a hazard to his boss arena, being the fire grates built into the floor. The grates will activate on occassion, burning brightly, before sending up gusts of flame to damage the hero. There are two health wells on the northern end of the arena on a thirty second cooldown to help alleviate the damage this causes, but as the player advances in difficulty, the time between each fire grate burning is less to the point where, in Inferno, nearly all of the floor is burning at almost all times.

The longer the fight lasts, the faster the floor will light up to damage the hero. The butcher, in inferno, is the first real gear check in the game, where the player will have to balance between dps and defense.

Farming for the Butcher[edit | edit source] 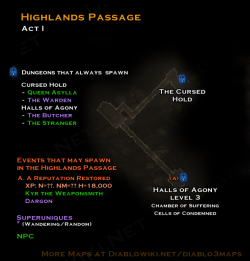 The Butcher is in some way involved in the following achievement(s).

The Butcher in Deckard Cain's Journal

The Butcher appeared in Diablo as the first quest boss. He was found in a small square room somewhere on level 2 of the dungeon. Even before you open his door, a gruesome selection of bloody corpses can be seen hanging within, and most players make a thorough, wincing inspection of his room after the battle.

Although he wasn't particularly difficult to kill if you were the right character level he has become part of Diablo's popular culture with his "Ahh, fresh meat!" war cry he issues on bursting through the door. Such was his iconic status Blizzard released one special Butcher t-shirt during Blizzcon 2009 and revealed another during a panel at San Diego Comic Con 2011.

In the second t-shirt, the Butcher appeared updated with huge horns and there was an entry in Deckard Cain's Journal with the same design of beast and these were enough to suggest that he will be making a return.

He did not appear in Diablo 2 giving him time to rest, recuperate and ready himself for Diablo 3.

It's first became apparent, through datamining of Diablo 3 Beta files, that the Butcher was to play a more important role in Diablo 3 as the Act One Boss. Blizzard attempted to obfuscate the Butcher's identity in the game files during the Diablo III beta by assigning him a "code name", being "Withers", which like all of the Diablo III internal code names, was equestrian in nature. A "withers" is an anatomical term for a portion of a horse's shoulder area.

Many fans may wonder how a dead Demon can come back to life to plague the town of Tristram once again, but Diablo and the Skeleton King seem to have no issue doing so.

The return of the Butcher, within the realm of the game world, is a deliberate action by Maghda and her Coven, through the use of her Cultists, to sacrifice the flesh and blood of living beings to resurrect this beast.

The Butcher's goal is to prevent the hero from moving on towards Caldeum with Leah and Tyrael. Maghda acts as an extension of Belial's will, and his will is to control the destiny of Tyrael. Magda is searching for his shattered blade in Act I, and she summons the Butcher to assist her in more physical means.

Beneath Leoric's Manor lies the Halls of Agony, home of the Butcher, where the Coven has been actively taking people they've abducted from New Tristram and Wortham to be sacrificed a gruesome manner.

Gossip option from Myriam the Mystic, titled An Unnatural Beast:

Once the Diablo 3 Beta went public and the files were datamined in earnest the image below was unnearthed. The image shows the portraits that the player earns after killing the four act bosses. The names were not displayed underneath but as the monsters are recognisable they were added for clarity. 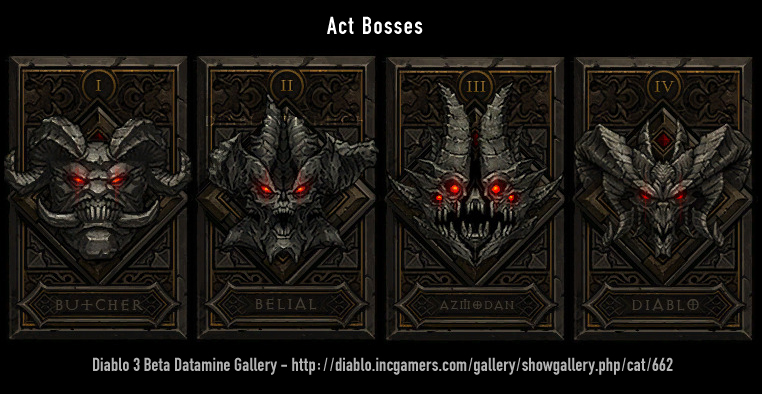 In the premier league now - The Butcher - Belial - Azmodan - Diablo