The Warden is a Superunique Skeleton mini-boss found in The Cursed Hold in Act I.

The Warden in combat. 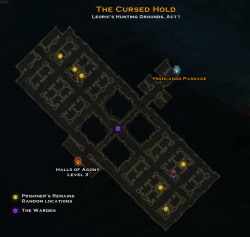 He is involved in the quest The Imprisoned Angel and will appear after all the spirits of the prisoners have been released for Queen Asylla.

There are no achievements associated with killing him. The Warden is the target of a Bounty, Kill the Warden.

The Warden spawns in the middle of a cross-shaped intersection of flooring within the Hold, with steep drop-offs which Savage Fiends will climb up to attack the player. The spawning of the Warden will be preceded by an omnipresent voiceover within the game, where he says "Am I alone here? Must I do this myself? So be it. Face me, and repent". Once the voiceover ends, the Warden will pop up in the center of the cross-shaped area to attack the player.

He possess Jailer (as you'd expect) and Molten affixes but still, if you're the appropriate level here he and his few minions (Savage Fiend) shouldn't present a problem. Even so it is best not to engage him in the centre of the intersection.

The Warden's battle begins at 9:25 of the first video, and continues into part two.