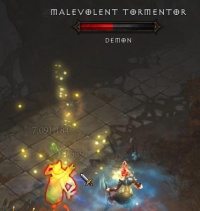 The Malevolent Tormentor is a special type of Treasure Goblin added to the game in Patch 2.1.2. These are the rarest type of goblins, colored dark gold/brown, and are arguably the most valuable, dropping considerably more materials and higher quality items than normal Treasure Goblins. Malevolent Tormentors will usually fountain out 1-3 legendary items. They also drop considerably more materials and gems, but as of February 2015 they were not included in the "drop materials in stacks" hotfix after Patch 2.1.2[1], and thus produce piles of items that require quite a few clicks to pick up.

Malevolent Tormentors have a special movement pattern, zigging and zagging more than the other types of Goblins, which makes them harder to kill, especially for melee characters. They can even teleport when running away, though only over a short distance. 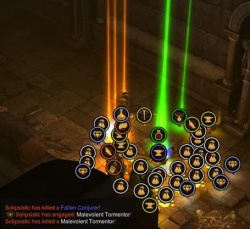 Malevolent Tormentors are very valuable for their almost-guaranteed legendary drops, and while they look enough like normal goblins that players often don't notice the difference until they die, they should be prioritized for the slaughter.

A player might choose to let one run for a bit, since their much increased drop chance applies to their running state as well as their death fountain, and they have decent odds to toss out a legendary item even before they die. The risk of letting the MT escape is a real issue though, and only players confident in their ability to execute the MT when needed should risk it.

Malevolent Tormentors are the rarest type of Goblin, and along with the Rainbow Goblin are they only type that never appeared in big packs of just their type, during the initial testing of Patch 2.1.2 on the PTR. Players may encounter MTs in larger packs of Goblins in Rifts, but MTs are always rare, and seldom appear in big packs. (Though it's possible to find 2 or even 3 in a big pack, ensuring a huge take of legendary items if they are all killed.)

As much as MTs look like normal Treasure Goblins, it's very hard to pick them out from the rest in a big pack of Goblins, and most players will just slaughter everything giggling in sight, rather than trying to hunt down individual Goblins.