Reflects Damage is a Boss Modifier possessed by Champions and Bosses (but not boss minions) on Nightmare and higher in Diablo III.

The property works as a sort of Thorns effect on the boss, causing the hero to take back as damage some percent of the damage dealt with attacks. The reflected damage comes from all attacks, not just direct one. Ranged attacks, and even spells such as Hydra or Sentry. The effect can be seen most clearly for players who have health bar displays enabled, as your hero will spout a steady stream of red numbers from all the reflected damage you are hurting yourself with. 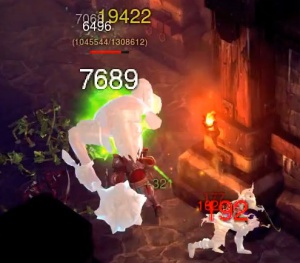 This property is also granted to a number of Elite enemies, most noticeably Siegebreaker on Hell and Inferno difficulties.

A player who is killed by a monster’s Reflect Damage affix will now be able to release his or her corpse and be resurrected by other players.

In December 2012 Blizzard revealed that they agree with the numerous player complaints that the modifier is too damaging and that it will be changing in an upcoming patch. [2]

1) We’re looking to redesign how the Reflects Damage affix works, as well as make it so that pet damage will no longer reflect back on the player. I went into a bit more detail here. (I believe the buff while active will have some sort of visual indicator, too.)


2) After seeing a number of posts from players about RD dealing what they felt to be TOO much damage (especially from minions), we did some additional testing and discovered that Rare minions with the affix were in fact doing more damage than intended. This is an issue we’re looking to address in an upcoming patch.

I personally have no problem with the way it is now but if it had been tested it could have been polished a bit better then it is now.

Lylirra: We were honestly pretty happy with the way RD functioned prior to 1.0.5, and thought it was in a good place in terms of balance. That changed, of course, whenever we implemented Monster Power and reduced defensive bonuses in 1.0.5. After reviewing player feedback post-patch and reexamining the affix as a whole, we decided that it could use some improvements. Overall, we think the affix will be much more manageable (if not potentially more enjoyable) as a result. That doesn’t mean our earlier opinion was wrong, though, it just existed under a different set of conditions.

This property is most dangerous to glass cannon type characters who do not have high regeneration or healing or life leech, but it can be deadly to any character who doesn't have enough healing, usually in the form of life on hit or life leech, to offset the incoming damage.

Ironically, Reflects Damage becomes more dangerous to very powerful characters. For instance, a moderately well-equipped character might deal 100k DPS with 45k health. As that character gets better equipment, their DPS would rise to 200k or more, while their hit points and regen stayed roughly the same.

A good strategy is to avoid hitting all of the Champions, or the boss and his minions, at once. Hitting a single target shouldn't be so deadly; it's when you are dealing big AoE damage to several of them at once, and getting the reflected damage from all the monsters. This is tough, since most of the best attack skills in Diablo III are great specifically because they hit so many enemies at once.

Reflects Damage does not grant any appearance change to the boss or champion with it. The property is seen only in the tooltip hover display, or by the effect on the player, as a steady stream of red damage taken numbers will fountain out from your hero as you deal damage to the enemies.

The effect is best seen in video, as a shower of red numbers constantly sprouting out of the hero.