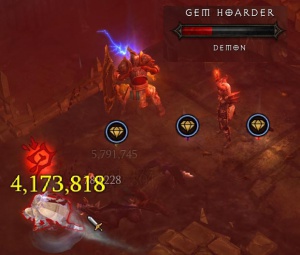 The Gem Hoarder is a special type of Treasure Goblin added to the game in Patch 2.1.2. These goblins are silver or chrome in color, and they drop gems when pursued, then large stacks of gems upon death. The usual output is about 20-25 gems at death, comprised of of random types appropriate to the monster's level. Players at level 70 will generally see about 20 Marquise gems and 2-4 Imperial gems, at the death explosion.

Initially these gems all fountained out individually, but after player complaints about all the clicking required to pick up the gems, Blizzard changed them to drop gems stacked in like types.[1]

Gem Hoarders do not drop items or gold, just gems. These gems are of the appropriate level, just as if they were dropped singly by a chest or Elite monster. Gems dropped by Gem Hoarders do work with the Legendary Affix on the Broken Crown, doubling the total gems dropped and increasing by 6x the gems of the type socketed in the helm.[2]

Gem Hoarders behave just like other types of Treasure Goblins, standing motionless until a player hits them or moves close enough to activate them. At that point they begin to run and giggle while dropping gems, pausing periodically and opening up a portal if left alone for more than about five seconds. They will escape through a portal if left untouched for too long or at a certain time limit after their initial activation, escaping death and taking their fountain of materials with them.

Along with Blood Thiefs, players may wish to let this type of goblin run around for a bit before killing it, since Gem Hoarders will drop a gem every few steps, potentially adding dozens of gems to the total fountained out when they die.

During early patch 2.1.2 testing on the PTR, Gem Hoarders and the other new types of goblins (Odious Collectors and Blood Thiefs) could spawn in mega-packs up 8-16 goblins, all of the same type. This led to ridiculous amounts of materials dropping, all of which had to be clicked up one stack at a time. Images from such an encounter can be seen below, and goblin articles.[3]

This was helpful to meet material needs, but required an annoying amount of clicking and most fans were happy when all goblin packs were changed to mixed type varieties, so there is very seldom more than 1 or 2 Gem Hoarders in the whole pack of 10+ goblins.