Azmodan, or the Lord of Sin is one of the four Lesser Evils. Azmodan is a major enemy in Diablo III, appearing in at least one of the cinematics (the Black Soulstone cinematic), as well as in the game. Azmodan is the ultimate boss of Act III, where he serves as the leader of the armies invading Sanctuary through the Arreat Crater. 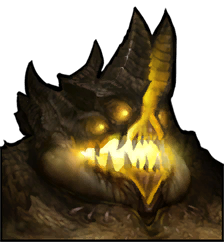 Azmodan, the Lord of Sin, is one of the seven Prime Evils. He's classified as one of the four Lesser Evils, along with Belial, Andariel, and Duriel. During the Eternal Conflict Azmodan won many battles against the High Heavens, and gained renown as the most capable battlefield commander of all the Lords of Hell; his ability to surpass Baal was only due to the latter's volatile nature and brashness in war.

As the Prime Evils turned their attention to the mortal world of Sanctuary, the Lesser Evils grew restless. Eventually, Belial, the Lord of Lies, manipulated Azmodan into leading a revolt against the Prime Evils. Azmodan is best known for events during the Sin Wars, when his alliance with Belial gave their combined demonic armies enough strength to defeat and banish the three Prime Evils into the mortal realm. (There is some speculation that the Prime Evils engineered their own exile and subsequent capture by the Soul Stones as an elaborate plot to ultimately gain more power.)

Azmodan and Belial's triumph was brief, for they fell back into war with each other as soon as they no longer had to cooperate against the Prime Evils. Azmodan's tactical acumen and overwhelming force allowed him to dominate the Civil War and defeat his rivals, including Belial.

From the early information we have about the plot of Diablo III, it seems that Azmodan has become ascendant in the Burning Hells, and is acting as the leader of the realm in leading a massive demonic army to invade Sanctuary; one of the key plot events of Diablo III.

The Lord of Sin[edit | edit source]

Azmodan in the D3 cinematic.

Azmodan as a physical being is an incarnate of all seven of the deadly sins: wrath, greed, sloth, price, lust, envy, and gluttony. He also controls powerful demons who personify each of those sins, two of whom will be seen in the initial version of Diablo III.

One of these is Gluttony Incarnate, Ghom. A second was revealed during a BlizzCon 2011 panel as Cydaea, the Maiden of Lust, formerly known as the Mistress of Pain.

There's no word on the other five incarnate sins, but it's presumed they will appear in the Diablo III expansions. (Which might hint at future developments; would Azmodan's lieutenants still be formidable enemies if Azmodan himself has been utterly destroyed?)

Belial and Azmodan in the Diablo I Manual[edit | edit source]

Azmodan is featured alongside Belial in the Diablo I Manual when the civil war between the lesser and prime evils is explained: 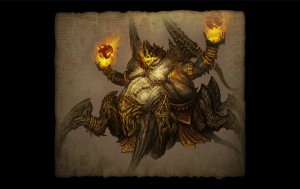 Azmodan is in some way involved in the following achievement(s). 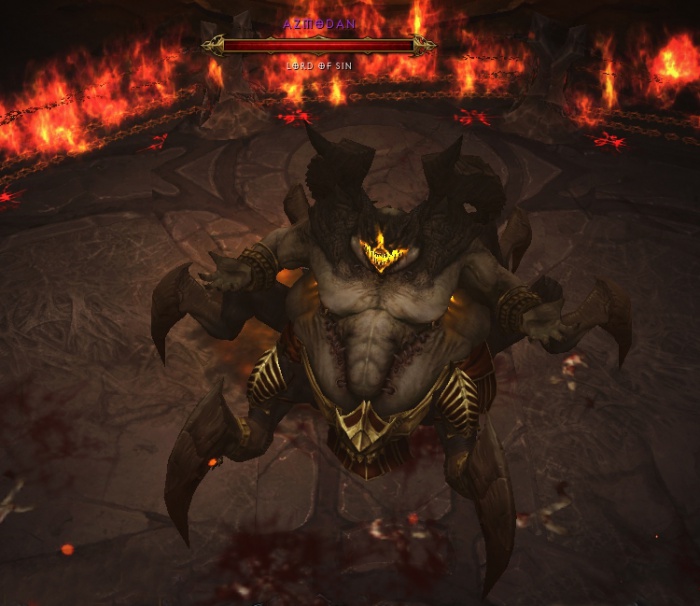 Azmodan shows up repeatedly in Act III, either through projected images of himself taunting the player, in Lore Books, and, of course, his boss fight.

Azmodan has six abilities in combat.