ADVERTISEMENT
From Diablo Wiki
(Redirected from Mistress of Pain)
Jump to: navigation, search 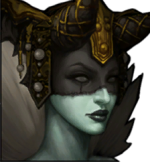 The Maiden of Lust (previously known as the Mistress of Pain) is a Diablo III Boss. She is a Demon type monster who resides in the Heart of Sin in Act III. 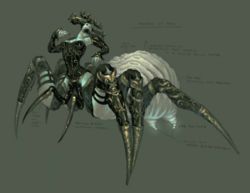 Concept art with notes.
The Mistress of Pain is a likely candidate to be a Boss type monster. Apart from having a title, a conceptual artwork depicting the Mistress of Pain lists several of her abilities - more than typical monsters have.

The Maiden of Lust is a demon with an upper body of a woman from the waist up and a body of a spider. She walks on six spider-like legs that appear to be made of soft flesh instead of the hard carapace found in spiders. The spider portion of her body also has a pair of bladed mandibles which are used for slashing attacks. Her upper body appears to be that of a beautiful human female but has claws on her hands and many sharp teeth. Her spider abdomen has large spinnerets that produce sticky silk which impedes player movement, as well as explosive projectiles that disperse in a cluster around the player.

Another artwork depicts her hanging by chains attached to her greaves, wearing dress-like attire and a serene expression. The significance of this has not been made clear.

Much like Azmodan, Cydaea will taunt the player as they decent the Tower of the Damned with her silky voice, descending from the ceiling into the player's view from a web. She is the "mother" of the succubus monster type and shows great affinity towards them.

Cydaea has a small handful of abilities, and the fight is more about attrition than all-out melee combat, as seen in a fight like Rakanoth or Izual. A basic melee attack is listed for her in the game's files, but she doesn't appear to use it. Her abilities are as follows:

Cydaea is in some way involved in the following achievement(s).

Besides the fact that she originally was portrayed to live in something that looks like a sewer, hanging from chains with skulls dangling around her, in her pretty dress, nothing is really known about the Maiden of Lust. Seeing as she has a nice dress, it might be some corrupted human princess in ages back, who's still very aware of fashion, but no one can do anything besides speculate.

Though Azmodan is close to all of his lieutenants, Cydaea is his special favorite. The Maiden of Lust is both beautiful and grotesque in appearance, with the torso of a woman and the legs of a spider. Her voice is said to be as smooth as honey, but she only speaks words of death.

The Mistress was originally only shown with the chains, and called the "Spider Queen" by the Diablo 3 community, but a few crumbles of information became available when the denoted concept art was released. The first work must have been on July 2003 or earlier, since concept art by Peter Lee is dated to this time. The Mistress of Pain was originally removed from the game over time constraints, but after a fan created a cosplay costume of her for BlizzCon, the development team decided she needed to be put back in. They then changed her name to the Maiden of Lust, and chose her as a lieutenant for Azmodan's army.

The Mistress is one of few new monsters that have received great attention by the Diablo 3 community. In this gallery, fan art is also included with the official art: