Malthael is one of the five ruling members of the Angiris Council that governs the High Heavens and the Heavenly Host. He is the Archangel of Wisdom. In the Reaper of Souls expansion, he will be the final boss.[1]

As the Archangel of Wisdom, Malthael served as the voice of reason for the Angiris Council and was first among equals, guiding the council with a benevolent hand. Contemplative and soft spoken, the truth of reality and the nature of the universe often occupied his mind. However, when Inarius and cohorts veiled/stole the Worldstone (the heart of creation), the philosophical base of Malthael's values began to crumble. Over the eons, his character has become darker and more grim.[2]

Archangel Malthael is a close friend of Archangel Imperius. However, when Imperius called for a vote to decide Sanctuary's fate, Malthael chose to abstain. Imperius was satisfied nonetheless, because a tie would mean Santuary's destruction.[3]

He will be the final boss in the Reaper of Souls Expansion.

In concept art, Malthael is depicted wielding a pair of sickles. The properties/powers of these weapons are as yet unknown. 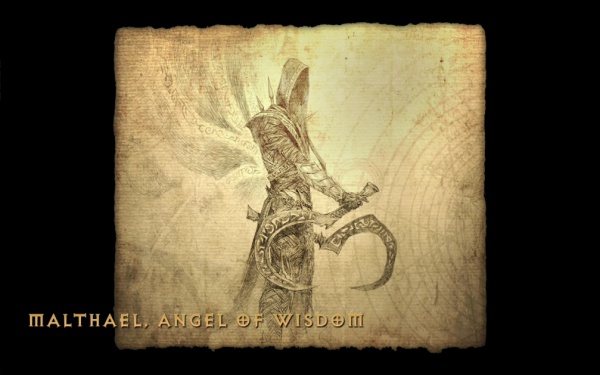 Concept art for Malthael as seen during Blizzcon 2011.