The Artisans are special kinds of merchant NPCs. They provide quest information, as well as numerous essential services such as crafting, item repairs, socketing and unsocketing, item enchanting, and much more.

There are currently two Artisans, the Jeweler and the Blacksmith. A third artisan, the Mystic, will appear in the first expansion Reaper of Souls.

The artisans travel with the Caravan and are available to the player in each act of the game. Artisans were introduced in August 2010, and are succinctly explained in the Artisan Video, narrated by Jay Wilson.

Artisans are NPC merchants who can perform various crafting services for your characters depending on their speciality. They can be trained, which improves their skills, adds to the crafting recipes they offer, and even improves the appearance of their wagons.

Crafting is their biggest special skill. This form of item creation requires a recipe, materials, and gold, which the Artisan takes and uses to craft a new item with some pre-set and some random properties. It varies from crafting in most RPGs since the outcome is not entirely predictable; the random properties can roll as a wide variety of modifiers, potentially yielding a fantastic item, or a piece of junk, from the same recipe. Numerous attempts at most recipes are to be expected before a great item is fashioned.

When first encountered, the Artisans seem like any other NPCs. They have problems that must be solved as quests. Only once the Artisans have been impressed by the hero's skill will they join the Caravan and travel with you, offering quest and story information, as well as their talents and abilities, for a price. They have strong personalities and will offer information and input on most quests and other issues in the game. As Jay Wilson explained during the Blizzcon 2010 Crafting Sanctuary panel:

We tried to make the artisans real people. Not generic. Strong opinions and ideas. They view you and your actions in real terms and talk about it.

There are three Artisans in Diablo III. Each of these NPCs are encountered during the course of gameplay, and once their quest is completed they will join up with the Caravan and travel with the player for the rest of the game.

See their individual pages for many more details.

Artisans can be trained to higher levels, gaining a new title and improved wagon appearance each time. The maximum level is ten, and with each level the artisans learn new recipes and plans to craft.

Training is not free; it costs increasing amounts of gold and materials, but players will always want to train up their Artisans, since this enables them to create higher quality items from better recipes.

The unlocking of crafting recipes is a process of drops, no matter whether the recipes come from training the artisan or from actual recipe drops. In order to train the artisan, the player will need to collect Pages of Training which are assembled into a book after five pages are collected. The book is then used, in conjunction with scaling amounts of crafting material and gold, to level up the artisan. However, it is not one book or gold cost per level. The player will have to "level" the artisan multiple times before the artisan reaches the next rank of progress.

Each Tome of Training that the player hands in will not only get the artisan closer to reaching their next rank of craftsmanship, but it will also teach them new recipes. This is one of two ways to get recipes in Diablo III; the other being lucky drops. It is important to note that increasing an artisans rank beyond a certain point will likely require a different type or "tier" of the training tomes, which are likely to drop in the higher difficulty levels, scaling along with the player.

In addition to being trained up, Artisans can be specialized in creating various item types. Jay Wilson spoke on this from Gamescom, in August 2010.[1]

Jay Wilson: After you’ve max leveled your Artisan, you can specialize them in areas. They’re not exclusive, if you want to just make axes, you don't omit the ability to make swords or armor. Each path is its own time and resource commitment. And you can specialize in item types that you like the best.

How specialization will work for the Mystic and Jeweler isn't yet known; perhaps the jeweler will know hundreds of recipes for rings and amulets, but will show more recipes for jewelry with good bonuses for melee combat, or spell-casting, or whatever your character desires?

Artisans were revealed in August 2010, at the Gamescom show in Cologne, Germany. Nothing was revealed about their development at that point (other than the fact that it was ongoing, with the Mystic and Jeweler not yet ready to be revealed), but during the Crafting Sanctuary panel at Blizzcon 2010, the developers shared some "making of" information about the Artisans. 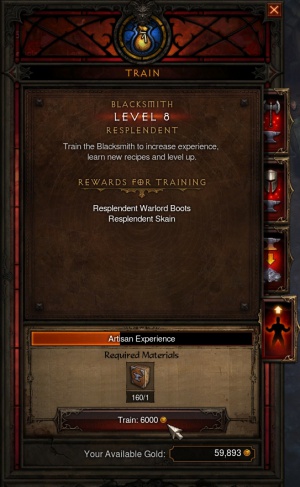 The Artisans interface window is a very functional interface. You see it to the right, with the icons down the left side clickable to open a new tab in the main window. 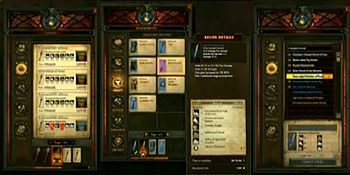 Artisan interface evolution, with the oldest on the left.

The design goal for the Artisan interface was something that was, "Quick to pick up, simple to use, and that let the player get about the business of killing things." They wanted to maintain a consistency of artisan interface design between the characters, and scrapped some early designs where the designs differed too much between the Artisans.

The image to the left shows the working models. The early designs for the crafting/recipes window had too much text information and not enough space for recipes. Only 4 items could be shown at once, which meant players had to scroll through multiple pages to see all of the options. Through multiple iterations the design was simplified with less information shown, until they got to a stage where ten items could be seen at once. That was still too cumbersome and presented too much information at once, and it got further simplified to the current design with just the item name and a progress bar behind it. That design is shown higher up this page.

Another early complexity was the time required to craft items. They had ideas they thought were great; "Let's make some top items take a full day to craft!" This was cool in theory, but lousy in practice since no one liked waiting that long to see how their effort turned out. 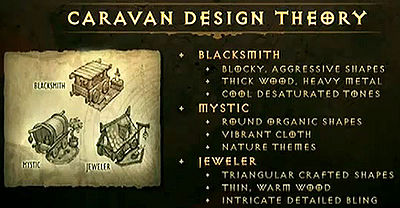 Concept art for the Artisans' wagons.

Another design issue was wagons of the Artisans. They dialed in the blacksmith's wagon look fairly quickly, but had more trouble with the other two Artisans.

The Mystic was hard to design. They knew they wanted round shapes and lots of natural wood, but their early designs had her wagon looking too much like the Blacksmith's. They ultimately decided to make her whole layout round and organic.

The Jeweler was also hard to design, for a different reason. It's easy to show the progression through the levels for the Blacksmith and Mystic, since their wagons get more ornate and they've got obviously higher level items lying around. But since the Jeweler only upgrades and crafts tiny objects like gems and jewelery, the artists couldn't show his higher level through those items. The ultimately decided to show his higher level largely through his wagon, by making it get much larger over time, with more intricate details, gold-plating on the sides, etc.

As the developers said, "Everyone levels up in Diablo. Even the vendors."

Three levels of the Blacksmith's wagon.