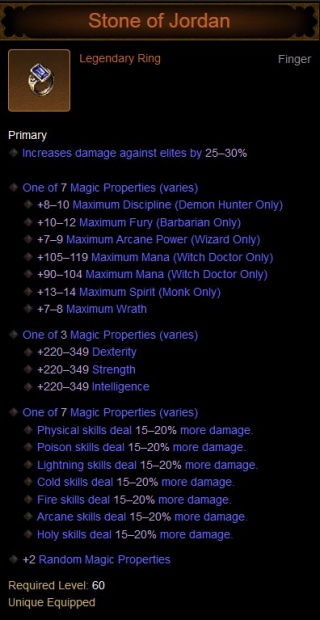 Stone of Jordan (or SOJ) is a legendary ring that can be found in Diablo 3 and Reaper of Souls. This item can be found and equipped by any class.

This item does not have a legendary affix, but despite that fact the Stone of Jordan is the second most sought ring in the game, behind only the Ring of Royal Grandeur, and wearing one of each is the end game gear goal of many players. The SoJ offers a huge bonus to the extremely valuable Damage against Elites, plus a big boost to one Elemental Damage type, both very sought after modifiers.

Several examples of this item equipped on level 70 characters can be seen below. View hundreds more samples of the Stone of Jordan via DiabloNut's armory. 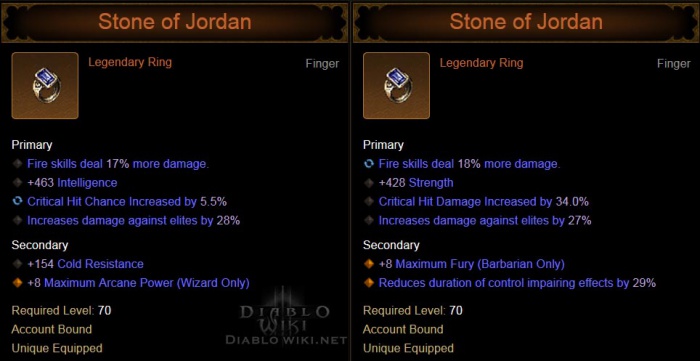 The Stone of Jordan was the rarest and most powerful (for caster characters especially) of the unique rings in Diablo 2 classic, and with gold overabundant and of no real long term use, this ring evolved to become the default currency of the game, with all high end trades priced in "SOJs." Which were massively duped at various times, resulting in enough of them to exist as currency, as the ring was quite rare to find in of itself.

SOJs lost their currency function in Diablo 2: Lord of Destruction as first gems, and then runes became the means of currency, but even a decade later, the term "SOJ" has something of a talismanic effect on Diablo players.