Enforcer is a Legendary Gem findable only from Greater Rift Guardians in Reaper of Souls.

Legendary gems can only be socketed in rings and amulets worn by a character (not by a Follower) and provide dramatic and powerful bonuses that are huge upgrades over any normal gems in the game.

All legendary gems improve with upgrades to rank 50, which can only be obtained via the NPC Urshi who appears after the death of a Guardian of a Greater Rift that is not completed in time.

This stone shares its powerful heart with those who serve the bearer.

Bliz Note: ''As was discussed in another thread, allowing this this gem to rank up to +100% pet Crit would likely cause undesired gearing issues and probably be a little out of line.'' 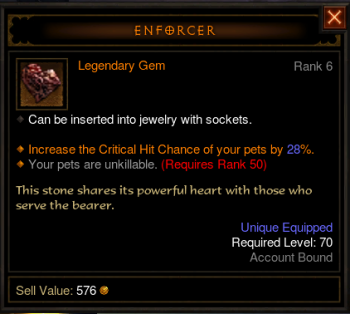 Enforcer, rank 6. Early PTR sample, before the increase per level was reduced.

All Legendary Gems improve from rank 1 up to rank 50, with additional stats for the primary bonus, and the extra bonus property unlocking at the maximum upgrade rank of 50.

Stats are pulled from the PTR and may differ in the final game.

Screens are from the early PTR testing, and may differ from live stats.