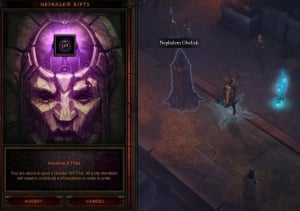 Entering the Realm of Trials.

The Greater Rift Key awarded corresponds directly to the highest level Wave cleared in the Realm of Trials. The wave to RGK level is roughly a 1-to-1 ratio, but GRKs are a few levels lower than the wave, and there's some randomness to prevent players from scoring precisely the level of GRK they are seeking. For instance, finishing Wave 20 will generally yield a GRK in the level 15-18 range.

The Realm of Trials area is a small, dark, shadowy, circular, arena-style map with a couple of health pools around the outside. Once there, players undergo a Trial as waves of monsters appear. Each wave spawns about 40 enemies and starts a 20 second timer. If players kill all the monsters in the wave before the timer expires, another wave spawns with slightly harder (more hit points and higher damage) enemies. Each wave begins with a text display of what level wave it is, and waves will jump up by more than one (a maximum jump of 6 waves is possible) if players complete them very quickly.

Players can fail to complete a wave on purpose, by running to the edge of the screen or just not killing the enemies. This is done if players don't want to start off in too high a level of Greater Rift. For instance if only a level 15 GR is required to get 3 guaranteed Legendary Gem upgrades via Urshi, players might only complete up through Wave 16 or 18, aiming to get an easily-cleared GR15, rather than having to struggle through a GR20. (All figures and difficulty of course vary greatly between characters and parties and their power level.)

When a wave is not cleared within the time limit, the Realm of Trials is ended and a blue portal appears to take players back to town. There they must speak to Orek, who will reward them with a Greater Rift Keystone that corresponds to the highest level wave they were able to complete in the Trial. The difficulty of the waves roughly corresponds to the difficulty level of the Greater Rift, but the GRK reward is scaled down a bit, to prevent players from entering a Greater Rift that's too hard for them.

This can also be a risk for players who have builds that are very good for large groups of weak enemies, since that's how the Waves are formed in the Realm of Trials. Lots of trash mobs of varying enemy types appear and rush in, which works very well with some builds. It's very possible to have a build that excels in the Realm of Trials, but isn't going to be at all as successful dealing with the Elites in a Greater Rift of that approximate level.

Blizzard initially said the Waves vs. GR level was in about a 3:2 ratio, so that a player who completed wave 30 would receive a GRK of about level 20.[1] That ratio has since been adjusted to be closer to 1-to-1, with the GRK only a few levels lower than the RoT wave completed.

The Realm of Trials feature was added in Patch 2.1, after extensive testing on the PTR.

Selected images showing off the Realm of Trials and associated game features.

Videos of RoT action from the PTR.