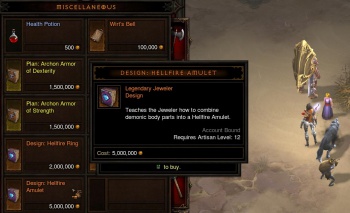 The Hellfire Amulet is a legendary amulet created by crafting special materials obtained via the Infernal Machine event. While the Hellfire Ring (db) was present in Diablo 3 since Patch v1.0.5, the Hellfire Amulet was added much later, in June 2014, three months after Reaper of Souls was released.

This item can only be created in Reaper of Souls, and not in Diablo 3 classic.

The Hellfire Amulet has a special legendary property of enabling one passive skill (from the class that crafts the amulet). It does not provide any +experience% boost, as does the Hellfire Ring.

Like all legendary items in Loot 2.0, the Hellfire Amulet is account bound and can not be traded, sold, or given away. It can only be earned via the Infernal Machine quest, so players who want one must build their own. The entire Infernal Machine process was modified in Reaper of Souls and grew much less attractive to most players. The developers have said that improving it is on their to-do list, but it will not be fixed in Patch 2.1, though they added the Hellfire Amulet in that patch to spice things up a bit.

Creating a Hellfire Amulet is identical in process to the Hellfire Ring, right up until selecting the different recipe from the Jeweler. See the Infernal Machine article for a full step-by-step walkthrough, but the short version: 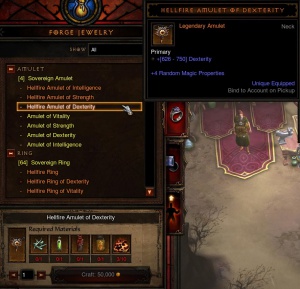 Hellfire Amulet recipes at the Jeweler.

Unlike the Hellfire Ring, the Hellfire Amulet does not have any +experience bonuses (unless it rolls +exp per kill as a random secondary affix). The special feature of this amulet is the ability to add a random passive skill. This skill is selected from one of the passives on the class that rolls the amulet, and passive skills are of no benefit cross-class. A Demon Hunter can't benefit from a Monk or Barbarian or Crusader's passive, etc.

Stats are subject to change while Patch 2.1 is still in testing on the PTR.

There are 3 different Hellfire Amulet designs in Diablo 3. They are identical except for the attribute selected, so just one is listed below for space considerations. The odds of rolling a passive useful to your class, and other good stats on the amulet are obviously pretty low, but the hope for slot machine style item payoffs is what keeps most players entertained by Diablo 3.

Sample Hellfire Amulets from the early testing on the PTR. These may differ from final live game versions.