Movement Speed (AKA "FM" for Faster Movement) refers to how quickly a character moves around the game world in Diablo 3. All characters have the same base Movement Speed, which is increased by a percentage by various item bonuses (most often on Boots), as well as various skills, plus the limited duration Fleeting Shrine or Speed Pylon.

Increased MS is very useful; it enables a player to do more in less time, moving through empty spots in the dungeons to quickly get back to action, and it's useful when escaping enemies or moving to reposition during combat. It's just fun to move more quickly too, and skills that boost movement speed are quite popular for function and convenience. 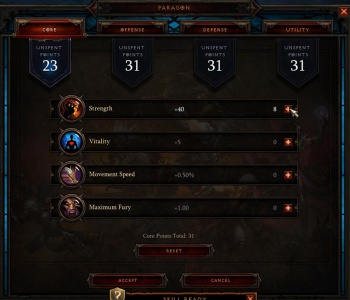 The Paragon 2.0 update Paragon system added Movement Speed via Paragon Points. Since the MS boost from PPs adds to the gear bonuses up to the 25% hardcap, the Paragon System actually devalued movement speed on gear, which was a very sought after property in Diablo 3 vanilla.

Which Paragon Tab the MS bonus was located in changed several times during development[1], which made a big difference in how useful or not that bonus was. Ultimately MS went into the Core tab, along with Mainstat, Vitality, and +maximum resource, which is the main reason it's a good strategy to enchant Movement Speed bonuses off of gear and to spend Paragon Points in Movement Speed.

For instance, here are the maximum bonuses per Core Tab property:

The math holds up for other useful bonuses from boots, such as +90-100 All Resistance, +350ish Armor, +10-15% skill damage (vastly better than any Core Tab paragon points), etc. The other bonuses aren't directly in competition with other options in the Core Tab, but the principle is the same.

In every case, a character gains considerably more benefit from one additional affix on boots (or other legendary items that roll with MS as an inherent bonus) than from the Movement Speed, in terms of spending Paragon Points to replace the bonus.

Diablo 3 vanilla had only a few legendary items (other than Boots) with Movement Speed. Loot 2.0 (in D3v2 in February 2014) added several additional non-boots legendary items with Movement Speed. Bear in mind that the MS hardcap from Equipment + Paragon Points is 25%, so there's no reason to ever equip more than 2 of these items on a level 70 character, and the best strategy is to enchant MS off of items, since it's better to make it up with Paragon Points. 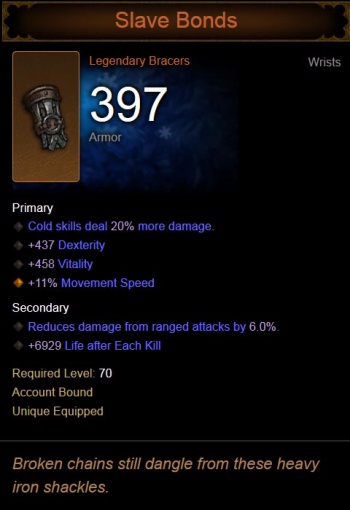 In earlier versions of Diablo 3, several legendary items (most notably Lacuni Prowlers bracers and Inna's Temperance pants) were extremely popular since they added 12% MS from non-boot slots. Most players tried to include one of those items in their end game build, and savvy players often included both, which then let them use boots without any MS, which could often be found for low prices even if they had exceptional stats.

There is no cap on the movement speed from skills, and it adds on top of the movement speed from items. Since these speed bonuses are very unevenly distributed some classes have a huge advantage in potential movement speed, and this is a major factor contributing to the popularity and overpowered nature of some characters and builds in Diablo 3. (That was especially true in Diablo 3 vanilla. D3v2 and RoS made numerous adjustments to create a more equitable faster movement sysstem.)

In addition to the "faster run" bonuses from skills, many other skills can be classified as Movement Skills or Escape Skills which move the character quickly from one spot to another, but can not be used repeatedly due to cooldown times or resource costs.

No passive skills boost the Barbarian's movement speed. That's not a terrible handicap since the Barbarian is the fastest class in the game thanks to the Sprint skill.

Demon Hunters can use skills to move very quickly, and they have one passive, Hot Pursuit that boosts movement speed 15% when at full Hatred. This is not a popular ability though, since having to alter play style to constantly end battles with full Hatred takes more time than the movement speed saves.

The better way to move like lightning with a DH is to use her Vault skill, and pair that with the Tactical Advantage passive. Using those abilities a Demon Hunter can race through the levels at very high speed, though she'll need a lot of Discipline to keep it up long term. (Vengeance and/or Night Stalker enable rapid Discipline regeneration.)

Monks have several methods for faster movement. The most obvious is a passive skill, Fleet Footed, which grants a 10% faster movement bonus. This will exceed the 25% item speed cap and has no resource or other cost, giving Monks the easiest path for any class to permanently exceed the 25% MS gear cap.

Active skills can be used in addition to or in place of Fleet Footed. Dashing Strike is an attack skill that teleports the Monk to the selected target. It can not be used to pass over objects or to teleport to an open location, though.

Monks can also use Mantra of Evasion: Wind Through the Reeds to add a 8% Movement Speed boost while the Mantra is in effect. This is not a very powerful skill effect though, and is seldom utilized.

The most common way to make a very fast Monk is to use the Tempest Rush skill. This active ability does not add movement speed at the base, but it enables the Monk to dash right through all enemy targets without being slowed or delayed. (Though he can be hit while using it.) The Tailwind rune effect adds a 25% movement speed bonus and makes the Monk a very fast object, though the damage from TR in this form is not sufficient to kill effectively, barring very high quality equipment and a low Monster Power level.

Tempest Rush has a heavy resource cost and most Monks use it to supplement their movement, as a burst of speed to move between one pack of enemies and the next. (Spirit is built up during combat.) There are full time TR-builds, though these require a lot of specialized equipment and other support skills, since a Monk requires a regen rate of around 13 Spirit/sec to use Tempest Rush non-stop.

The Witch Doctor lacks any way to provide a full time boost to his movement speed and the lack of fast dashing skills for this class is a common source of complaint from WD players.

Though none of the passives fit in here, there are some active skills that provide the class a short term movement speed boost.

Teleport was the ultimate movement skill in previous games in the Diablo series, but in Diablo 3 it is limited by lengthy cooldowns, and only the Wormhole rune effect allows for even two or three Teleports in rapid succession.