The armor stat works much like a resistance in Diablo 3. Higher Armor means that more of the damage from attacks is absorbed or mitigated. This is not how armor (defense) worked in Diablo 2; in that game higher armor worked against monster to/hit and made it less likely that they would strike your character with an attack. This design choice forced the developers to make monsters hit for very high damage since they so seldom connected, which lead to a boom or bust sort of combat.

Diablo 3 uses the resistance-like form of Armor to create a steady flow of damage that players can learn to mitigate with more Armor, higher hit points, blocking, life regeneration, life on hit/life leech, or other options. 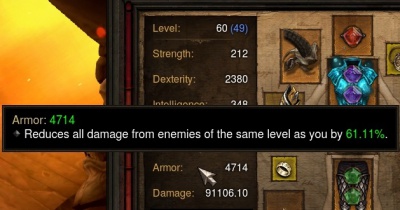 Every piece of armor (equipment) has an Armor value in Diablo III. These add up with Strength and may be modified by various skills and passives to arrive at a total Armor value which grants a substantial damage reduction. This figure is a key source of damage mitigation in Diablo 3 and has a major effect on a character's survival ability.

Higher Armor values make a clear difference in the damage taken. Some stats, all for a level 60 character vs. level 60 monsters:

As with resistances (which function very similarly) there are diminishing returns on the benefit from higher amounts of Armor. The first thousand points of Armor effect a damage reduction of about 25%, while moving from 4500 to 5500 only yields about 4.5% damage reduction. That 4.5% might be of huge importance to a high level character taking on a dozen enemies at once, but it's clearly a lot less of a total change than the first couple of thousand points of Armor provide.

The Strength attribute adds directly to the Armor total, in simple arithmetic fashion. More strength = higher Armor = more damage reduction. This is very handy for Barbarians and makes them take much less damage from melee combat. Other characters get less benefit from it; the screenshot below shows a Paragon 49 Monk who has virtually no Strength on her equipment and thus gains very little additional armor that way.

The items (armor) worn by characters in Diablo 3 are hugely-varied and individually-designed. All pieces of equipment look different on all classes, and often vary between the genders of each class as well. This required a huge amount of artwork and animation, but is part of the fine polish Blizzard puts on all the components of their video games. 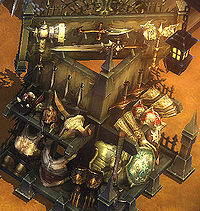 Various pieces of armor, by a master blacksmith.

There are more types of armor to be worn in Diablo III. All the item slots return from Diablo II, plus several new ones; shoulders, pants, and bracers.

While the developers initially planned not to include class-specific armor types, that changed during game design.[1] By the beta test there were numerous pieces of armor that could only be equipped by one class.

Weapons are much the same, with a few types that are class-specific, and others that can only be used by some, but more than one, class.

The same piece of Armor in Diablo III looks very different depending on which class is wearing it, and often by the gender as well. This system expands on the basic component looks in Diablo 2, with radically more variety and design depth.

Another major change to Armor in Diablo 3 is the removal of repeating armor types on each difficulty level. Gone are Diablo 2's Exceptional and Elite armor/weapon classes, each of which repeated all the same item graphics, but with bigger stats. This means that every piece of armor and weapon in Diablo 3 is unique (by level and appearance) but also means there are fewer total items, since everything doesn't repeat 2 or 3 times.

Gear sets are the term the D3 Team uses for the 18 different armor sets. See the gear sets article for full details. A few sample sets, revealed by Blizzard prior to Blizzcon 2010, can be seen below.

The following was applicable during development, when the attributes were (briefly) changed from Vit/Str/Dex/Int. The information does not apply to the final game, and is preserved here purely for curiosity/posterity.

Both Armor and Defense increase your character's damage reduction, but Defense offers much larger gains, per point. (But since high level armor items can have many hundreds of points of Armor, both values must be cultivated for long term success.) 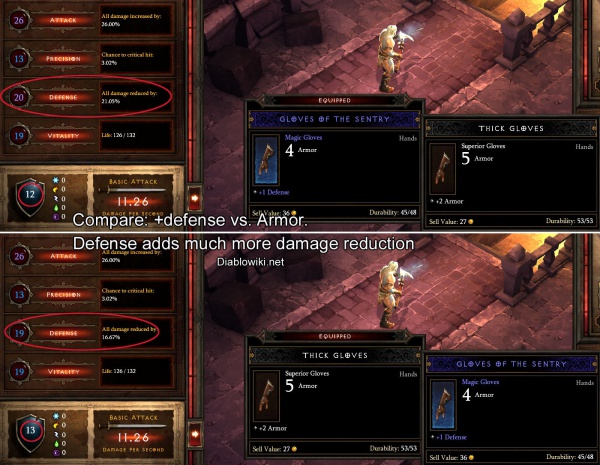 Armor vs. Defense compared with item bonuses. Shot from the Diablo III beta.