A Quiver is an off-hand item that is exclusive to the Demon Hunter. A quiver can be equipped with any sort of bow, hand crossbow, or regular crossbow. All quivers have an inherent bonus to Attack Speed, and rare and legendary quivers can roll up to 5 primary affixes and 2 secondary affixes.

Legendary Quivers in Diablo 3 and Reaper of Souls. All these items can be used only by the Demon Hunter in the off-hand slot. See the individual articles for full stats and details. 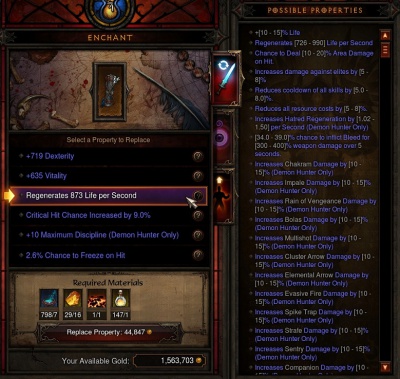 Quivers are the most difficult items to enchant in the game, due to the huge number of possible affixes. There are about a dozen different potential primary affixes, not counting the skill bonuses, of which there are more than 20.

On top of that, legendary Quivers can boost damage 10-15% to every single damage-dealing Demon Hunter skill. It's not possible to randomly get affixes that boost two different skills, so if a quiver has something like "Increases Multishot damage by +12%" for one of the affixes, other +skill damage affixes will not show up if one of the other affixes is enchanted. However, if the Multishot damage is enchanted, all the other possible affixes, and all the other possible +skill affixes will show up, making the odds something like 1/35 to get any one particular affix.

For this reason, many players will just throw away a legendary quiver if it rolls without Critical hit Damage, since that's an essential affix for a top quality quiver, and trying to enchant it can be such a frustrating and expensive experience.

Diablo 1 had no quivers. Bows/xbows were equipped as two-handed items and had unlimited ammunition, though using a bow or crossbow reduced its durability, just like hitting enemies with a melee weapon.

Diablo 2 removed durability from bows and replaced it by requiring quivers in the off-hand slot. Each shot with a bow (arrow quiver) or crossbow (bolt quiver) used one arrow or bolt from the quiver, and thus players had to continually replenish the stack. Initially in Diablo 2, arrows went up to 250 and bolts up to 150, though each was increased by 100 in a later patch. Quivers stacked their contents like bullets in clips in a first person shooter, so if a player had an equipped quiver with 100 arrows and picked up a found quiver with 50 arrows, it would automatically stack their equipped quiver to 150 arrows.

There were no magical, rare, or unique quivers in Diablo 2, and the overall effect of quivers was simply a nuisance that forced players (mostly Amazons) to waste time with annoying inventory management. Few Diablo 2 players lament the removal of a counter on their arrows/bolts in Diablo 3. 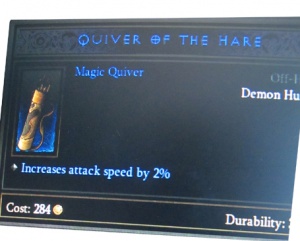 The first screenshot of a quiver in Diablo 3, taken of a monitor at a game demo in 2011.