Materials have no function on their own, but they are required for many crafting and item modification activities, including enchanting, crafting weapons, armor, and jewelry, and cube recipes, and training Artisans.

Materials are salvaged from white, blue, yellow, and orange/green items, and can also be dropped directly by monsters, chests, and especially from Treasure Goblins.

Diablo 3 version 2 reworked and simplified the Diablo 3 vanilla materials system, with one common, one magic, two rare and one legendary item.

In Reaper of Souls, a new tier of materials was added and in Patch 2.3, the lower tier was removed. The same patch added materials found only in Horadric Caches. Prior to Patch 2.0.6, legendary materials dropped from certain monsters and were used to craft items.

All these salvaged materials will also drop from monsters, chests, and especially from Treasure Goblins such as the Odious Hoarder.

Materials that drop directly from various sources and can not be obtained by salvaging items.

Death's Breath drop when Elite monsters are killed, and also from Golden Chests and Goblins. DBs are highly sought after as they are required on quantity for all sorts of high level gear crafting, as well as in most of the Kanai's Cube recipes.

Horadric Cache Materials. Introduced in Patch 2.3, these materials can only be obtained from the Horadric Caches awarded by Tyrael when a character completes all five bounties in a given act. Many legendary and set item crafting requires require one or more, and two of the most powerful Cube recipes require 1 or 5 each of all these materials, making their farming essential. 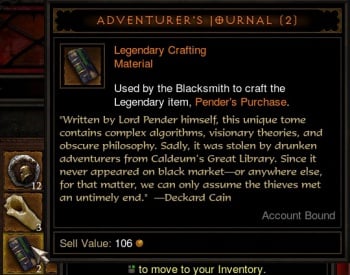 Legendary Materials were removed from the game in Patch 2.0.6. There were several dozen of these special legendary materials, each required for various legendary and set item crafting. As they only dropped from certain unique (purple) elites, they were quite hard to farm and were ultimately removed from the game and the crafting recipes rearranged. Even many patches later, players will still occasionally find an Adventurer's Journal from an in-game item, though this material no longer has any function in the game.

White and Blue materials were perpetually in short supply until Patch 2.3 simplified crafting and increased their drop rate, while also enabling Treasure Goblins to drop large stacks of materials. Patch 2.4 further eased material shortages by adding the Cube recipe, Anger of Iben Fahd. It enables players to convert 100 stacks of white, blue, or yellow materials into each other, as needed.

See Material/Archive for details on the Diablo 3 Vanilla Materials.