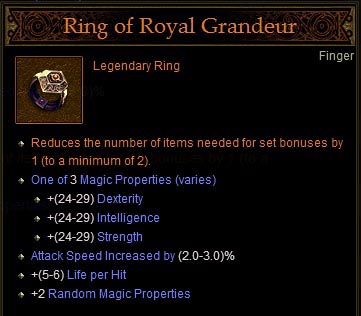 The Ring of Royal Grandeur (RoRG) is a Legendary ring found only in Reaper of Souls. It is obtained from Horadric Caches earned in Act One, and is one of the most sought items in the game thanks to a very powerful legendary affix.

"Reduces the number of items required for Set Bonuses by 1 (To a minimum of 2.)"

This means that when wearing this ring, equipping 2 items of a set will grant 3 item bonuses, 3 will grant 4 bonuses, and so on. This makes a huge difference for players who dress accordingly, and it's not uncommon to see characters wearing this ring plus 2 or 3 items from 3 or 4 different sets, to reap as many partial set bonuses as possible.

This ring is a leading contributor to the Sheet Toughness display errors.

This ring always spawns with a mainstat, Increased Attack Speed, and Life per Hit. There's only one random primary affix, which most players hope turns up with ChC or ChD. If the random stat is okay, then the LpH is most often enchanted in search of more damage. The legendary affix is the real delight though, and most players can gain considerable overall improvement by using a RoRG that's red to all comparisons vs. their other Ring, in order to gain all of the additional partial Item Set bonuses.

Database stats list this item's stats at level 15, when it can first drop. The stats scale up with level and are much higher at level 70.

Several screenshots of level 70 versions of this item in use by players of various classes. Items courtesy of the DiabloNut armory. See more examples here.

This item is considered all-but-mandatory for end game gearing, and most players farm Act One bounties until they obtain one. Split Farming is the best/fastest way to find this item, and even after they've got one, many players keep returning to Act One bounties both since that's the easiest act and fastest to clear, and since another RoRG never hurts, and might roll with a better stat in the random primary affix.

This item, and all other Horadric Cache-only items (as of Patch 2.0.5) are best farmed on lower difficulties. There is a bonus to legendary drop rate from Caches found on Torment 2 and above, but the much faster farming speed on Normal or other low difficulties, especially when split farming, more than offsets their slightly lower drop rate.

This item was introduced with and can only be found in Adventure Mode in Reaper of Souls.