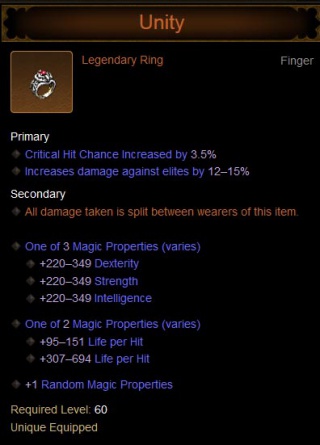 Unity is a legendary ring that can be found in Diablo 3 and Reaper of Souls. This item can be found and equipped by any class.

This item is a very powerful and popular item with an unusual legendary affix that divides the damage taken between all characters in the game wearing the ring. (Or a character and his follower, if the follower is wearing Unity also.) When it comes to offensive potential, this ring is one of the best, with the big bonus to Damage Against Elites, along with the inherent bonus to mainstat and ChC.

There are some oddities to the damage splitting:[1]

With a character and a follower wearing the ring, the damage is shared. This can be helpful as damage taken by the hero is cut by 50%, though that will often cause the Follower to die from the shared damage. It can also be dangerous to the player; if a follower takes huge damage, such as from standing near multiple exploding Molten or suicide bombers, half of that will share to the player with a Unity, even if they are standing well clear of the damage. It's very possible for players to die purely from the damage their follower takes, when both are using Unity.

An interesting trick is to equip hero and follower with Unity, while the Follower also equips one of the "can not die" Legendary Follower Items. That item acts as a 100% damage reduction bonus to the Follower, so they take no damage at all. Thus 0% of the damage they take reflects to the player via Unity, and 50% of the damage the player takes goes to the Follower, where it has no effect. This effectively gives the player full time 50% damage reduction, and thus a Unity on both and that follower item is considered mandatory for the highest level Greater Rift play in Reaper of Souls.

This item initially had an inherent affix granting Life per Hit, which most players enchanted into an offensive stat. The LpH bonus was removed in Patch 2.1 (though it may still roll as the random primary affix.)

Several examples of this item equipped on level 70 characters can be seen below. View hundreds more samples of the Unity via DiabloNut's armory. 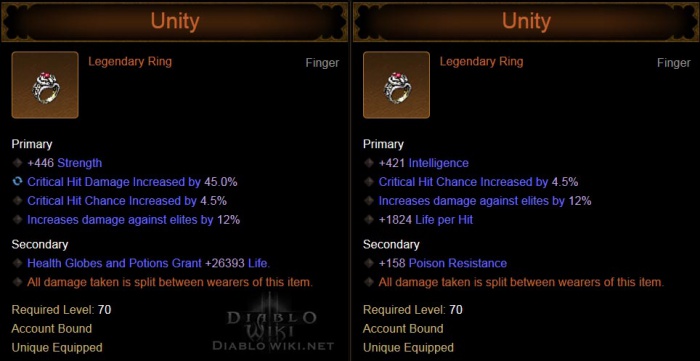