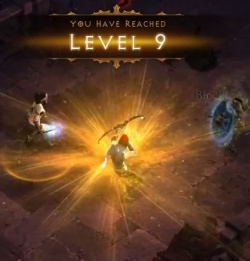 The level up display.

Experience is earned in Diablo 3 by killing monsters and completing quests. Players wish to gain experience in order to achieve level ups; which make their characters stronger, unlock new abilities, and enable the use of better equipment. It is confirmed that the new Reaper of Souls Expansion will increase the level cap from 60 to 70. Also new in the expansion is unlimited Paragon levelling (up from a cap of 100).

Experience is gained primarily from killing monsters, though quests grant experience bonuses as well. Experience can be gained more quickly by increasing your game difficulty (Up to the maximum of Torment VI), and using equipment with +experience bonuses (such as the Hellfire Ring).

The game is balanced where the monsters in the game dynamically level up as you do, so your experience gains will always be rising from killing higher level monsters. On higher difficulties, the experience bonus increases the amount you obtain. With a help of a friend, you could potentially skip the gear requirements of the higher difficulties and gain even higher experience rates by letting your friend kill things for you, potentially leveling to 60 in a few hours.

Leveling up in Diablo 3 is a notable experience, with a loud sound effect and bright splash of light around the character. (Yellow for levels 1-70, blue light for Paragon level ups.) Upon each level up tooltips display the new skills and/or rune effects enabled, the attributes gained (+3 to mainstat, +2 to vitality, +1 each to the off stats).

In addition to the visual display, a character's life and resource is entirely refilled and an explosion radiates out from the character, damaging and knocking back any nearby monsters. Many players have actually been saved from imminent death by hitting a level up just as things looked darkest... though this is obviously a difficult circumstance to obtain intentionally. 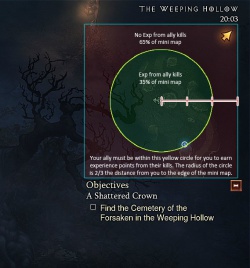 Killing monsters is the main source of experience in Diablo 3, and the only source for Paragon levels. Experience isn't actually "shared" since all characters within range when a monster dies earn their full possible experience, the same amount they would earn while playing solo, whether they scored the kill or not.

Characters must be fairly close together to "share" in the experience for a monster kill. The range is about 2/3 of the minimap, or a bit more than the visible screen (this varies depending on your resolution). Refer to the images for a visual representation, or see the original news post.

The experience gained per monster kill is based on the monster's level. Characters should be within 5 levels of a monster's level to earn the full experience bonus. Killing monsters much higher or lower than your character's level reduces the % of possible experience awarded, however the experience per monster increases so dramatically on higher levels that the fastest way to level up for a low level character is to share in the kills made in Hell or Inferno games, on higher Monster Power settings.

Experience gain per kill can be greatly increased in a number of ways, including:

It's not uncommon for well-equipped end game characters (Hellfire Ring + Leoric's Signet on the character and the Follower) to pull 200-300% bonus experience. More +experience isn't necessarily better, though.

Players seeking the fastest possible leveling up speed must balance their +experience gear and MP with their killing speed. Higher MP levels and more exp gear yields more experience per kill, but if the killing speed is much slower (due to higher monster hit points and lower DPS created by wearing the +exp gear) then the total experience earned over time might be lower, even with more exp per monster. Not to mention that fewer/slower monster kills means fewer item drops.

For players serious about level up speed, it's a good idea to keep a log. Record the starting time of each game, note your equipment, build, and the MP level, then record the total time of the game and your ending experience. After a few trials the data should make clear which strategies are yielding the best experience over time.

All quests on Normal, Nightmare, and Hell difficulty levels grant experience bonuses, which are in preset amounts. These bonuses do not exist on Inferno, or for any character who has reached level 60 (even if they are on a lower difficulty level).

A new feature in Diablo III grants experience bonuses for killing a lot of monsters at once (Massacre), or dealing steady damage and scoring regular kills over a long period of time (Kill Streak). These are announced with pop up tooltips that display the kill total and the experience bonus.

This feature was bigger in anticipation than in actuality; pre-game fans were very interested and excited by the concept and the exp bonuses, and during the Beta test some players made huge efforts to rack up the highest totals possible (as well as working on destruction bonuses. In the final game, these features are largely a novelty, since the experience rewarded is a tiny fraction of what is earned from the kills themselves.

There are numerous types of experience bonuses in Diablo 3. Click to any of the specific articles for more details.

There are a number of achievements triggered by special experience bonuses. The most notable is Light Entertainment which is achieved by killing 666 monsters with falling chandeliers. Since chandeliers are only found in the Catacombs in Act One and they don't generally do enough damage to kill a monster that's not already wounded, this one can take some doing.

A few experience tooltips from early in the game.

During most of Diablo III's development, the D3 Team seemed set on repeating Diablo II's maximum level, and they said it would be 99 or 100. That changed during 2010, and in September of that year the developers announced that the maximum level would be 60. This figure was modified shortly after release with the reveal of the Paragon system, which allowed players to gain up to 100 Paragon levels once they reached the maximum level of 60.

After the Paragon system went in, players generally refered to their level as "P#", as in "P32" = Paragon level 32.

The addition of Paragon levels seemed to contradict one of the main tenants of Diablo 3's design theory, as it was explained to players when the maximum level 60 change was first revealed in August 2010. As the developers explained it at the time, the design goal in Diablo III is similar to that of World of Warcraft; characters should reach the maximum level from clearing out all of the basic content, and do not need to endless grind the same areas to keep leveling up. That theory was a big change from Diablo 2, and an unsuccessful one, as the Paragon level system largely restored the long term level grinding system from Diablo 2.