Quests lead the story and progression of Diablo 3.

What Are Quests?[edit | edit source]

Quests are the meat of Diablo's plot, story, and progression. They must be followed to progress. In Diablo II Lord of Destruction there were many quests that contributed significantly to character building, but unfortunately this iconic feature has been removed in Diablo III for unknown reasons.

Quests are triggered and continued by following the instructions below the minimap on the side of the screen. When completed, they provide experiance and gold (only), which is a big change from how the Diablo II quest system worked. In addition, all quests must be completed, one after another in the order they are given. There is no way to fail a quest in Diablo III. It is possible to have a high level character "carry" you through content, until you reach level caps. It is even possible to powerlevel through the content.

Waypoints and Checkpoints are unlocked based on quest progress. 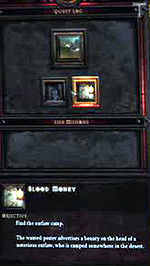 The final quest interface was modified from the blizzcon versions. The final version consists of a small description of the task to accomplish, and a journel entry for whatever class the player is using. A very easy way to check what is needed to be done on a quest is to look to the right of the screen, which has the instructions on how to progress in the quest.

Below are all the quests in Diablo III.

Events are mini quests that build off, but are not directly connected to (usually) the main quests.

Act I has 10 quests. The following quests are in Act I:

The Return to New Tristram is manditory for doing the Infernal Machine event.

Act II has 10 quests. The folling quest are in Act II:

Act III has less quests than the other acts, with only 7. The following quests are in Act III:

Act IV, like diablo II's Act 4, is the smallest act in Diablo III, with a grand total of 4 quests. The following quests are in Act IV:

Events are small sub-quests that have a random chance to spawn in an area. They can appear accross every act besides Act IV. Typically, they consist of completing a task for an npc, such as the Matriarch's Bones event or the Forged in Battle event.

Blizzcon 2009 display.
Atomic Gamer: Is there anything specifically from Diablo II that the team felt needed improvement and wanted to tweak for Diablo III?


Kevin Martens: The questing and story. I think we’ve added way more quests, more variety of quests. We’ve randomized the quests, and have these sort of quests that are self contained. For example, if you enter a dungeon in Diablo III, there might be somebody standing at the entrance, like a treasure hunter, saying, “Hey, I heard stories about The Idol of Rygnar is hidden somewhere in this dungeon. Help me find it and you can share in the reward.” Then you go through the dungeon and protect this guy. Then you’ll find the idol and you’ll get the reward.

People will turn on you…you’re never quite sure what is going to happen. We’re adding all those random elements all over the world. There is way more quest content overall than Diablo II, period. Also, I think we wanted to do a much better job on the storytelling aspects, not just the cinematics, which are fantastic, but also in the storytelling itself, like more twists and turns, more interesting quests, more variety of experiences. That’s what we spent a lot of time on, and making the co-op nature of it better as well.

This was one of the first statements blizzard made on behalf of quests in diablo III. As you can see, blizzard was origionally intending to make quests diverse, interesting, and much improved to diablo 2.

At Blizzcon 2008, a couple of quests were playable. They were:

All were featured in Tristram/ nearby dungeons. Quest rewards were small items (random boots and the like). Only the skeleton king quest appeared in the final game.

At Blizzcon 2009, many more quests than the last year were avaible, based in the deserts in Act 2. They were:

Some of these quests appeared in some form or another in the final game (*'s). Rewards were items and experiance.

A couple small quests appeared at Blizzcon 2010. They were:

All 3 of these quests appeared in the final game, although the first mention was expanded upon as the Imprisoned Angel quest.

I think Jay hinted during Blizzcon that there might be updated quests to keep higher level content exciting to keep people coming back and playing again.


Julian Love: It's not so much actually high level versus low level. I think we have a plan that facilitates high level content. What I think you're really getting at there is replayability, and what that gets down to is the way we're exercising randomness within the game. We've put a lot of focus towards what kinds of randomness are really beneficial in supporting replayability and what things are just, heh, not all that important or not all that awesome. One of the things that we have in the system that we have is something that we call - well, we have a really technical name for it -- sub-scenes.

What it comes down to is we can sort of like create a hole in the world that's like a socket that we can fill with just about anything that we want. It could be empty ground with a bunch of monsters on it, it could be a giant canyon that a really elaborate scripted event happens, it could turn into a caravan walking across the desert that you have an escort quest on. The point being is that this hole in the earth can randomly, at any time become something totally different. It could even be a doorway to a whole new dungeon that you've never seen before. So, the fact that the world is able to change things up and actually deliver different events, stories and quests is what's really going to make the game a lot more replayable at the both the low and high ends.

This was somewhat implamented in the final game, but not to a great extent.

We’re doing -– there’s a main storyline that is, parts of it might be randomized depending on the area, depending on what the quests are, depending on what the actual objective is. But apart from the main quest, most of our other content is randomized, so from game to game it will be completely different. I can’t give you any kind of percentage because we’re still playing with those numbers, but that’s really the way we built this game is so that we can have a lot of randomized content, including story elements and including quests.

This did appear in the final game in the form of events. However, the main story is completely static.

DF: Will there be class specific quests in the game? If so, can you explain how they would work?


Jay Wilson: We are still discussing whether or not we would like to include class-specific quests in the game mainly because of the simple fact that it may not really fit in with the fast-paced play-style known to the Diablo series. While this is definitely something we would like to consider, we just haven't agreed on how just yet.

However, we would like to do something in regards to character specificity. We are looking into having different dialogues and experiences for the same quest or interaction for each of the classes. Each character will react differently and have different responses for different scenarios. For example, the Barbarian may do or say one thing in response to what an NPC has to say, whereas a Witch Doctor will treat the encounter in a complete opposite manner.
Can you tell us anymore about the class-specific quest system in the game?

: So when you start the game will the different classes begin in the same place or will you start at some sort of origin level to setup your character?

Blizzard has not yet added class specific quests in Diablo III.

Long story short, blizzard appears to have had goals for making quests more interesting but ended up scrapping most of it, and now we have what we do today.

Quests in the Expansion[edit | edit source]

No changes to quests have been made so far in the expansion Reaper of Souls.