Blood Money is a quest given by an NPC, or by a Wanted Poster in the Canyon Rim Mines area on the surface of Act II. Players must find Husam, a wanted outlaw, slay him, and return his head to Captain Dagved in the Enclave of Khamsim to earn the full reward.

Players who saw this one in the Blizzcon 2009 demo didn't get to test it out completely enough to be sure exactly how this one worked, but there seemed to be two ways to get the same quest. There were several NPCs in the Enclave of Khamsim, all of whom talked about different quests in each game (randomly generated). Some quests had to be done before others would be given, and some of the NPCs just talked with gossips that didn't actually lead to quests.

The Blood Money quest was given, in different games, by an NPC named Captain Dagved, and by a Wanted Poster. It wasn't clear if both could give the same quest in the same game, or if it was always one or the other in a given game, randomly. In either event, the mission was the same. Players had to find a notorious outlaw who was hiding in the Outlaw Camp, kill him, and return with his head.

It seemed that the head had to be brought back to Captain Dagved if he gave the quest, to earn the reward. If the quest came from the Wanted Poster, simply killing the outlaw was enough to earn the reward. In either event, his head rolled cleanly free after he died, which was fairly convenient.

(And no, the Outlaw Camp wasn't much of a hiding place if everyone knew he was there.) 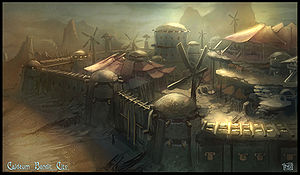 The Outlaw Camp is fairly far from the Enclave, located (according to semi-conflicting player reports) in the next level over, Howling Plateau. It's underwhelming when reached. The camp appeared to spawn in every game, though the quest did not always appear with it. The camp always looked the same anyway; just a cluster of tents that could not be entered.

The Outlaw Camp is definitely not to be confused with the Caldeum Bandit City.

When Husam was there, he wasn't even hiding, but was just standing out in front of one of the buildings, waiting to be killed. (He didn't put up much of a fight either, dying in just a few hits, Gharbad style.

Completing the quest seemed to vary, depending on whether the quest was given by the Wanted Poster or by Captain Dagved. The confliction confusion was described in Diii.net's Blizzcon 2009 Quest Report: [1]

I never actually finished this quest, since the one game I found Husam and got his head, I never returned to the Enclave of Khamsim to get the reward. I did note a bunch of oddities about this quest though, in terms of which parts of it were visible depending on which order I found them in. It showed clearly that the quests in Diablo 3 are not set up as they were in Diablo 2. 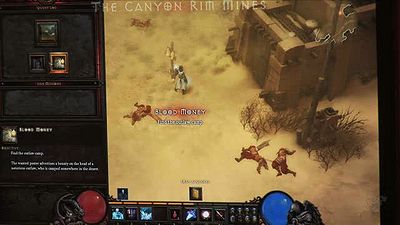 In Diablo 2 the order of events seldom mattered; if you got to the Graveyard in Act 1, you’d find Blood Raven whether you’d already received the quest from Kashya or not. And if you killed Blood Raven, when you returned to town and talked to Kashya, she’d first recite the quest giving speech, then immediately go into the success speech, which began with those familiar words. “I can hardly believe you’ve defeated Blood Raven!” which is as much of the speech as most furiously-clicking players ever heard.

The Blood Money quest was different, since the parts weren’t all there if I didn’t do it in the right order. Here’s how it worked, as best I can remember.

One gruesome oddity that no one at Blizzcon thought to check: What did Husam's Head look like once picked up? It, like all quest items, went directly into the quest items tab of the inventory. But it should have been visible there, before it was returned for the bounty. Would it have been gross and bloody with the tongue lolling out? Or just a round lump in a sack?