A character's Inventory is the menu page that shows the Paper Doll with currently-equipped Items, and the inventory where spare items are stored. The inventory system has changed a great deal from how it functioned in Diablo II, and Diablo III's inventory has changed many times during the game's development.

That process seems to be near an end though, as Jay Wilson confirmed [1] in August 2010 that the current look is near final, and that it had not changed in the last half year of development. 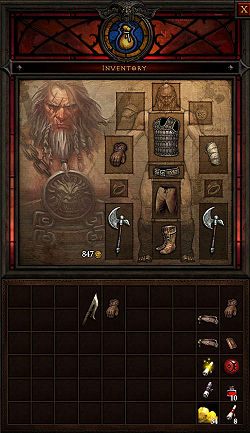 Inventory semi-final, August 2010. The large space on the left is open since the Talisman was removed in that build.

The inventory layout has evolved steadily during Diablo 3's development, with the general layout varying slightly, and the individual features changing a lot. See the full comparison image further down this page for a side by side look at the evolution.

The current, near-final[2] version of the Inventory is simpler in design, and has much more room for items than most of the earlier versions did. The D3 Team played around with the different options quite a bit, experimenting with packs to increase the number of slots, tabs to hold different items (quest items and runes had their own tabs at one point), and many changes to the paper doll portion of the display.

The location of the Talisman has changed in every build as well. In the current, August 2010 version, it will be displayed on the left side of the window, beside the paper doll. This is an improvement in design over earlier versions, where the Talisman was only seen as a tiny icon, which had to be clicked to open a new window, in which it displayed at full size.

The way items display in the inventory has changed over time as well. The earliest revealed version of the Inventory had items that all took up one space each, with the number of spaces determined by the size of the Adventurer's Pack the character had equipped. In the current, semi-final version, all clothing and weapons take up two spaces, standing taller than they are wide. Smaller items, such as scrolls, runestones, and gems, take up just one space, and most such items stack.

This has varied with the different designs of the inventory window. The current design has the largest inventory yet, with space for several dozen items, plus numerous smaller objects. This huge space, along with the newly-revealed Salvage Cube makes it seem like players will very seldom need to return to town just because their inventory is full.

This is intentionally, as the developers of Diablo 3 have included numerous features to make regular town returns unnecessary. Salvaging, Artisans who work on projects while the character is not in town, the Scroll of Wealth, the removal of Town Portals, and more. Once you enter the dungeons in Diablo III, you are intended to stay there for some time.

As of August 2010, there were no plans for any auto-sorting features in the inventory, stash, or shared stash. [3] This is something some fans have objected to, since other RPGs have added some handy sorting options; ways to group all like items; that were very convenient. Whether that sort of thing will be needed/wanted/missed in Diablo III remains to be seen, but if they don't support it, it seems like a ripe target for some player-made UI mod. (If those weren't prohibited.)

Inventory evolution over time, from the debut in June 2008 until late 2010.

The basic inventory and paper doll design seem fairly set, though the details continue to change.

The paper doll is on top, with shoulders, pants, and bracers added to the item slots we saw in Diablo II.

Below the paper doll is the inventory grid, which has repeatedly changed in form and function. One feature returning from Diablo II is the gold counter, with the amount of coin a character is carrying shown numerically, and no inventory space required to hold the money.

One thing the designers have stressed is their desire to fit in a lot of inventory storage, while keeping the items large enough for players to appreciate the graphics. They've tried a lot of different ways to do this, including a feature that caused items to enlarge when hovered over, and multiple inventory tabs so the items in each tab could be larger and more visible.

Charms are stored in the Talisman, the function of which was revealed at Blizzcon 2010.

Comparison of the same set on wiz and barb.

Blizzcon 2010 revealed that item icons in the inventory (as well as displayed on the paper doll) adapt to the looks of the item when equipped by the character itself. It was already known that the same item displays differently when worn by e.g. a wizard or a barbarian. Blizzcon 2010's D3 Panel showed how one armor set worn by both classes had totally different icons according to the looks of the set on each of the classes. Christian Lichtner explains the improvement during the Crafting Sanctuary panel at Blizzcon 2010 in the transcript below (also, see image to the right):

Christian Lichtner: Of course, what's all this epic armor without epic icons?
Mike, "The UI Guy": Nothing! Nothing!
Christian Lichtner: Yes. <laughs>. Mike does our icons. So, what you can see here is the icons actually match, obviously, the 3D model. As you put your icons on the paper doll, it will show up on the 3D model [to the left]. What's nice about this, too, is the different looks for the armor sets actually match across the classes. What I mean by this: this is the exact same armor set on the wizard as it is on the barb. And, on the barb, we can see the icons matching the barb set. And, on the wizard, it matches the wizard set. It's very nice, because there is no disconnection between putting the armor on the character and what it actually ends up looking like on the character. That's another improvement we did over Diablo 2, and we sort of pushed the envelope a little further on Diablo 3.

The D3 Team has promised that we'll see a much larger town Stash in Diablo III. They've also said the stash will allow easy item transfers between characters on the same account.

Since no specifics or screenshots of the stash have yet been revealed, we can only take them at their word. 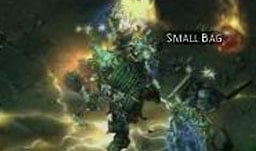 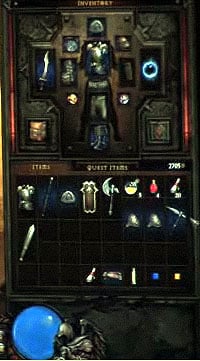 During WWI 2008 and BlizzCon 2008, the inventory was similar to that of World of WarCraft, with one slot for each item, and a possibility to expand the inventory space by adding up to four bags to your character. Smaller items also stacked up to five in a stack in order to save space. It started with 12 slots, but could progressively be upgraded to 30 slots.

This system was simplified over time, and as of August 2009 there's only one bag slot, but it can add a great deal more space to the default character's inventory.

The evolution of the Inventory was discussed during Blizzcast #8, in March 2009. [4]

Bashiok: Since people saw the game at BlizzCon, the interface and the UI has actually changed dramatically.. ...What are the changes that have come about since then?

Mike: Well one of the biggest things involved in Diablo are items, right? We’ve experimented with a few things and one of the big things that everyone liked from Diablo, as an entity, were the large objects right. While it was more efficient to go with a WoW style one size fits all icon, which is what most people have seen, we really wanted to see what we could do and so we went back and reevaluated the system and we’ve decided split it into large and small objects.

That brings up the question of Tetris inventory all over again, and a lot of people are opposed to that, some people like it, some people don’t. So what we did we ended up tabbing the inventory, so now you have your large items, and then you have a tab for small items, and there’s a third tab for quest items. That way all the items can coexist nicely with each other without the frustration, which w as one of the complaints about the old system is the frustration in trying to fit everything into your pack.

Bashiok: And are we still going to see the bag system coming back, the expandable [inventory] with the bags, or is it a set inventory size for each tab?

Mike: Current design right now is to have bags. You’ll get bags and they will expand, you know kind of like in WoW, except you’re not going to open up separate windows. You’ll start off your inventory with say… you know, eight slots, right, and then you’ll get a new bag and that has ten, so two more slots will open up within that tab, but you’ll never have multiple tabs. Like you won’t have two or three “large” tabs.

Bashiok: Right, and is that working out pretty well so far? It’s been in testing for a while.

Mike: Yeah, most people seem to really like it. I mean the feedback has been pretty good, personally I love it, because it lets you do both, it lets you have the large icons but it eliminates the frustration that people voiced about having different sized items within your inventory.

Bashiok: And you can really see the artwork as it is now with the larger icons...

Mike: Oh yeah, very much so.