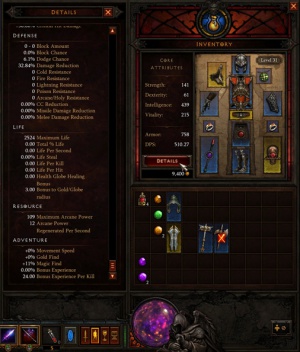 Paperdoll, inventory, and character stats all in one.

The term "Paper Doll" refers to the human figure seen in the Inventory window, which players dress up with various items.

After many iterations, the same window contains the paper doll, the inventory, and the character's attributes and stats, which were formerly displayed in the character window. (That window was removed from the game during late beta testing.)

The Diablo III version of the inventory/paper doll is altered in numerous ways. The Inventory page details the improvements to the inventory and character storage space. Other differences include:

The Talisman was found beside the paper doll for years. This was an inventory space that housed charms, which chiefly provided stat boosts. It was shelved for possible later implementation pre-beta.

The inventory space changed repeatedly. The final form is a large 10x6 grid that is the same for all classes and levels, with all items either 1x1 or 1x2 in size. During development every aspect of this changed, including item size, inventory size, inventory space determined by bags and the Adventurer's Pack, and much more.

The elimination of the character window and the incorporation of all those stats into the paperdoll (fitting into the space initially occupied by the talisman) occurred fairly late in development. 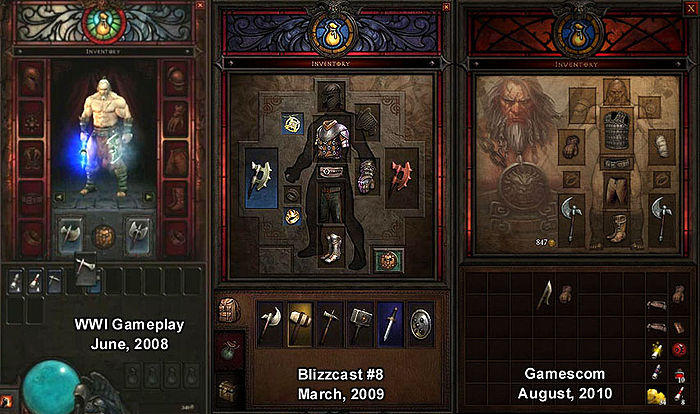