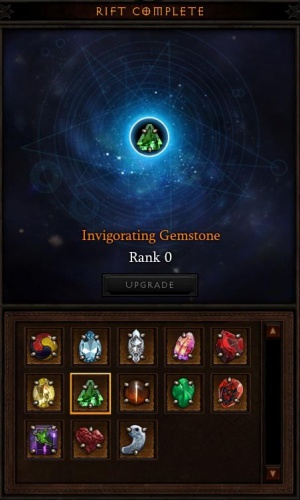 Legendary Gems are only dropped from Greater Rift Guardians, the final bosses of Greater Rifts. A Gem is guaranteed to drop if the player doesn't have on in his equipment, inventory or stash. This guarentees that a player will get all Legendary Gems without having to rely too much on the RNG. Duplicates are only possible if another character takes a Gem out of the stash.

All gems are dropped at rank 0 and must be socketed into a ring or amulet, making such rings and amulets valuable. Players can use the Mystic to add sockets to ring and amulets they like. Socketing and removing work the same as with normal Gems.

Legendary Gems come with an effect with an upgradeable value in it. Each rank the gem gains increases the value by a set amount. Gems are upgraded by Urshi after completing a Greater Rift within 15 minutes. Players get 3 chances to upgrade gems for each rift. Upgrade odds are based on Gem Level and Greater Rift Level. When both are equal, the chance is 60%. When the Greater Rift is more than 6 level higher, the chances up, topping out at 100 % at 10 levels. If the Gem is higher, the chance is halved for each rank of difference. The max gem rank is 200, far beyond the highest Greater Rift Clear.

Note that the odds recalculate with each successful upgrade, so a gem rolling successfully could be 100% on the first try, 90% on the second, and 80% on the third.

Legendary Gems were immediately embraced by players as a powerful new feature in the game, and sockets in jewelry became immediately sought after as mandatory end game affixes. Of all the gems, the offensive ones were the most popular and most used, since killing things faster is almost always the best and most fun strategy in Diablo III.

As for defensive legendary gems, even in Hardcore they were hardly used, which prompted much bigger defensive bonuses on the gems in the second batch, Esoteric Alteration and Molten Wildebeest’s Gizzard, added in Season Two.

The system was under construction all throughout the PTR and saw major changes during July and August, 2014.

Gems initially had 50 ranks, with the odds to upgrade[1] increasing on higher Greater Rift levels. This was reworked after a few weeks, and a patch on August 5, 2014 changed the maximum level from 50 to 200 and greatly increased the odds for multiple rank boosts per upgrade, as well as granting multiple upgrade opportunities on higher level greater rifts. [1]

That system was changed again late in the PTR, with the ranks cut from 200 to 25, and a whole new system of upgrade odds implemented, based on the difference in level between the gem and the Grift. Those odds were the final system which went live a few weeks later. 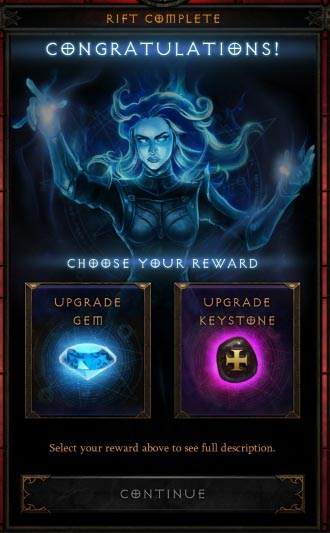 Blizzard's John Yang explained the design theory behind Legendary Gems while they were being tested on the PTR, July 15, 2014. [2]

Hi everyone. I wanted to pop in here while discussion on Legendary gems is ongoing.

First off, our philosophy on Legendary gems is that, when you pick one up for the first time, you should immediately want to use it, assuming it’s for your build, since some gems don’t apply to all builds/needs. This puts a minimum bar on the starting power level. After that, the power increase per upgrade is directly related to the frequency of upgrading, which is closely tied to the Greater Rift reward scheme and is still being iterated on. In the end, we’d like gems to be infinitely upgradeable when it makes sense, but not be outrageous.

Now for the details. The existing stats you see on Legendary gems on the PTR today are somewhat placeholder. So, to steer further discussion in a direction that’s more in line with the next PTR build, here are the freshly tuned numbers (with some of my notes) for each gem.

Legendary Gems are still undergoing significant iteration at this time, so you won’t see them available on the PTR right away. The gist is that these gems are infinitely upgradeable, and provide special Legendary powers when socketed into the appropriate gear slot. They can only be socketed into Rings and Amulets, and can be upgraded by completing additional Greater Rifts. The higher you place in a Greater Rift, the more likely your gem will be successfully upgraded. We’ll have more details in the future as we continue development on these powerful baubles, so stay tuned!

Images of Legendary Gems, from the initial 50 rank system on the PTR.