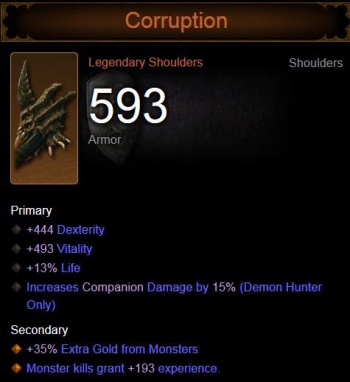 The 4/2 on Corruption shoulders.

4/2 refers to the 4 primary / 2 secondary affixes that most rare and legendary items roll with in Diablo 3 or Reaper of Souls, with the Loot 2.0 itemization system. The 4/2 system replaced a more randomized system in Diablo 3 vanilla, where affixes were not assigned to primary or secondary, and items could roll up to 6 affixes, selected almost entirely at random.

The 4/2 rule makes it impossible for items in Reaper of Souls to be super high quality. For instance, Diablo 3 had occasionaly quinfecta items (or even "septfecta") with five ideal affixes.

That's six primary affixes, an impossible roll in Loot 2.0, but one that existed in D3v.

Most legendary items have 4/2, though a few have 5/2 or 4/3, with some inherent bonuses added to the normal amount of values. (Very popular items such as Magefist and Ice Climbers have useful inherent bonuses and a total of 5 primary affixes.)

Most legendary items have at least 1 or 2 inherent bonuses, which are always found on that item and which count for some of the affixes, reducing the possible number of random modifiers. The range is wide, and while some legendary items (often crafted items or set items) have 6 random affixes, (always assigned 4/2) many others have 1 or more inherent bonuses. A few items have all 4 primary or both secondary slots inherent, allowing for no randomness in that item's bonuses (though the range of each bonus will still vary).

No randomness is found on legendary items including Dread Iron, Vile Ward], Madstone, Erlang Shen. These items always have the same 4 inherent primary affixes, and the only variety comes from players enchanting one of the inherent bonues.