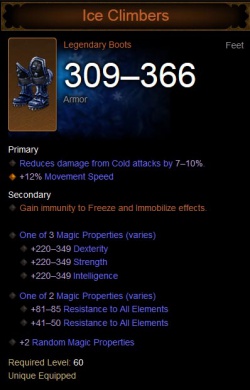 Ice Climbers is a legendary boots that can be found in Diablo 3 and Reaper of Souls. This item can be found and equipped by any class, and is the rarest and most sought after boot in the game.

The Smart Drop system ensures that these boots will usually roll with the mainstat appropriate to the class that finds it. Boots can roll with +skill bonuses as well, and these will also usually get Smart Loot'ed to appropriate skills for your class.

Ice Climbers were the most valuable boot in the game in D3v and in D3v2 and RoS they remain the most sought after boot in the game. Their legendary affix is hugely powerful granting the wearer immunity to all snares and debuffs. This means the character is not slowed to stopped by Frozen explosions, Jailer, environmental obstacles like mud or tar pits, the traps thrown by Bogan Trappers, etc.

On top of that the boots grant a considerable damage mitigation to cold attacks, and like Magefist, allow a very rare five primary affixes. The ideal roll on these boots puts Vitality in the random 5th primary affix, and then allows a player to enchant the inherent bonus to Movement Speed into a skill bonus, which will grant much more value than the MS, which can easily be made up with Paragon Points.

Several examples of this item can be seen below. View more samples of the Ice Climbers via DiabloNut's armory. 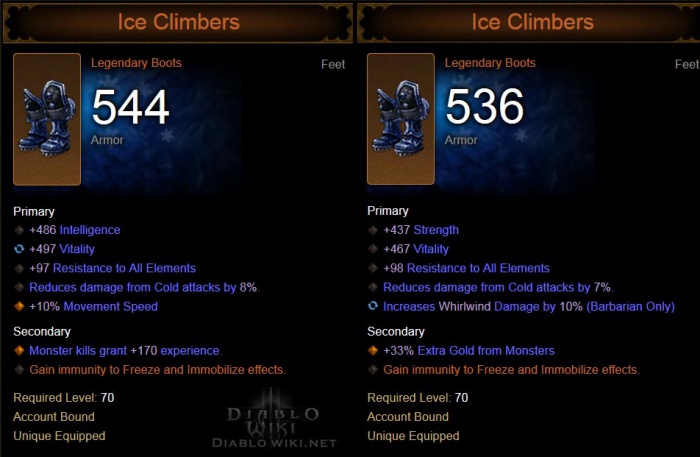