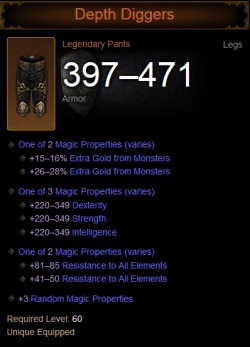 Depth Diggers is a legendary pants that can be found in Diablo 3 and Reaper of Souls. This item can be found and equipped by any class.

The Smart Drop system ensures that these pants will usually roll with the mainstat appropriate to the class that finds it. Belts can roll with +skill bonuses as well, and these will also usually get Smart Loot'ed to appropriate skills for your class.

This item does not have a legendary affix, or any special/unusual inherent bonuses. These were a popular item in Diablo 3 vanilla, where they had an inherent bonus to magic find and gold find. Only the bonus to Gold Find remains in Loot 2.0, and the other properties are just randomized.

Several examples of this item can be seen below. View more samples of the Depth Diggers via DiabloNut's armory. 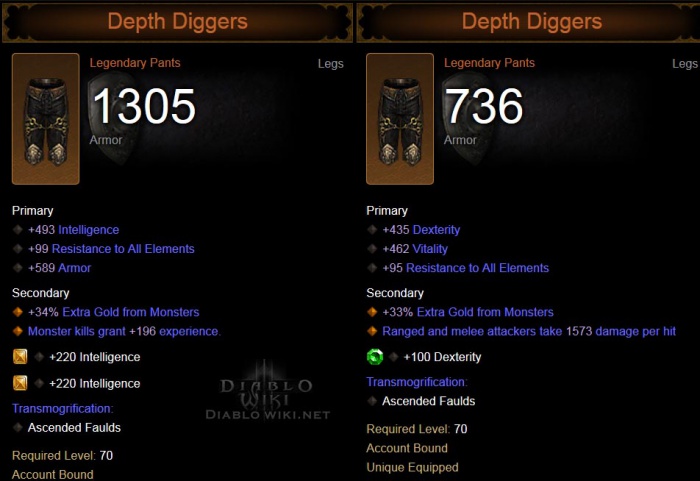 Depth Diggers got a big buff in Patch 2.1 when a legendary property was added, then modified, causing some controversy as Wizards and Witch Doctors were excluded from the bonus.

Naturally, fans wanted to know the reasoning behind this change:[3]

WHY??? Blizz, One of the few item changes the players are excited about is the Depth Diggers’ new power… Are you keep on nerfing what is fun?


Grimiku: The philosophy behind the decision to prevent the bonus damage given by Depth Diggers from working with Witch Doctor and Wizard Signature spells was two-fold.

First, Signature skills are not the same as resource generators, and typically have higher damage. Even with Prodigy and APOC, it doesn’t change the fact that, at their core, Signature skills do not generate resource. At present, Depth Diggers are only intended to benefit/boost resource generators, which does restrict their value to Barbarian, Crusader, Demon Hunter, and Monk skills.

Second and more importantly, we don’t want to create an environment where Wizards and Witch Doctors are driven to only cast Signature skills because of a single item. Wizards and Witch Doctors also happen to already have items that make some of their Signature skills incredibly powerful (Mirrorball and Rhen’ho Flayer, for example), and there’s a risk that with Depth Diggers this could funnel gameplay into something that’s very one-dimensional. Ideally, we want your skill usage to be thoughtful and engaging, at least more so than just holding down left-click until an Elite pack or Rift Guardian dies.

That said, we are more than happy to hear your feedback about the changes we’re making, and we encourage you to continue to do so. If you feel that Depth Diggers should benefit Signature skills, be sure to let us know how and why (these are two very important pieces of information).