Obsidian Ring of the Zodiac 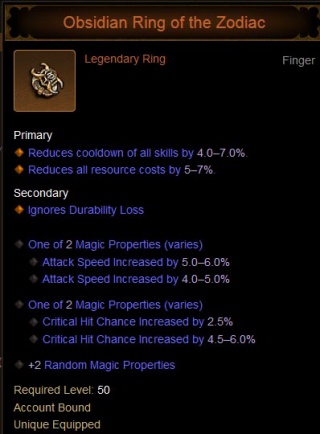 Obsidian Ring of the Zodiac is a legendary ring that can be found in Diablo 3 and Reaper of Souls. This item can be found and equipped by any class. This item's name (and formerly stats) were an homage to the "Ob/Zod," the most popular magical ring in Diablo 1.

The Smart Drop system ensures that this ring will usually roll with the mainstat appropriate to the class that finds it. Rings are generally considered offensive items, and most players insist on Critical hit Chance, plus other trifecta stats and a mainstat. The advent of Legendary Gems has made a socket a very sought after ring property as well.

This item was completely overhauled in Patch 2.1, losing the +All Res and +All Attributes that were its stats during D3v. They were replaced with four inherent primary affixes, giving this item zero variety in the main stats. It also has an unusual 4/3 affix arrangement, with 2 random secondary affixes to go with the inherent secondary bonus to indestructibility.

Several examples of this item equipped on level 70 characters can be seen below. View hundreds more samples of the Obsidian Ring of the Zodiac via DiabloNut's armory. 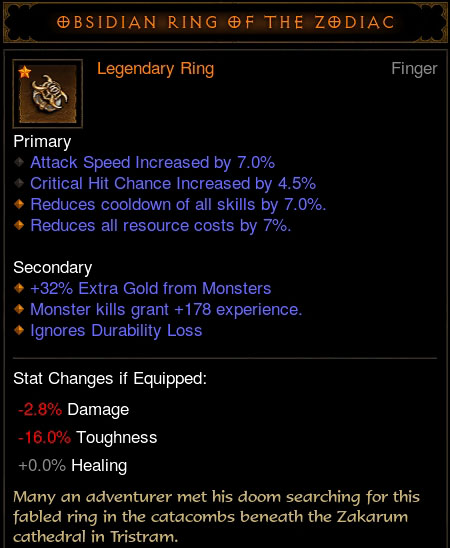 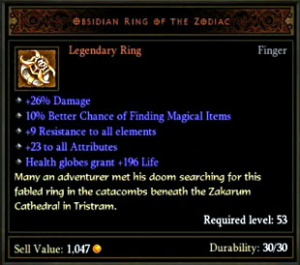 This item is inspired by and modeled after the famous "ObZod" ring from Diablo 1, and the lore makes that reference clearly. The Diablo 1 item was not a unique ring, but simply a magical ring with "obsidian" (+30-40% to all Resistances) for the prefix and "of the zodiac" (+16-20 to all attributes) for the suffix.

When this item was first previewed leading up to Diablo 3 in 2011, its inherent properties were +damage, +vitality, +2 random properties -- attributes that had nothing to do with the Diablo 1 ring. Fans complained loudly, and the developers heard and adjusted the stats, giving it an appropriate bonus to All Res and to All Stats. This thematically improved version was shown it off with new, more-relevant affixes at a Blizzcon 2011 panel.[1]

The ring was buffed again in Reaper of Souls, but ran into some bugs with item enchanting on the stats (detailed below). Perhaps due to that issue, the item was redesigned in Patch 2.1 with all influence from Diablo 1 removed from the properties.

There was a bug with this item when Enchanting first went live. The item allowed players to select any of the individual attribute bonuses to enchant, even though they were all part of the same special attribute that added to all stats. Thus players were surprised when they tried to turn the unwanted Strength or Dexterity or Intelligence into something new, and found all of the attribute bonuses vanished. [2]

For clarity, we didn’t intend to allow players to re-roll the all-stat affix on the Obsidian Ring of the Zodiac, so the Enchanting UI for it right now isn’t optimal. Unfortunately, this isn’t something we can hotfix, but we do plan on adjusting the UI so that the all-stat affix is not a re-roll option in an upcoming patch. We don’t have an ETA on that patch just yet, but it should be available in the next few weeks.

In the meantime, please note that once the all-stat affix has been removed there isn’t a way to get it back, so be sure to keep that in mind when enchanting the ring until this address can be addressed.

The bug was fixed in a subsequent patch in May 2014, before the ring was redesigned entirely in Patch 2.1, released in August 2014.