Bezoar Stone is a legendary spirit stone that can be found in Diablo 3 and Reaper of Souls. This item can only be equipped by the Monk, and will only very rarely drop for any class other than the Monk.

The Smart Drop system ensures that spirit stones will usually roll with Dexterity, or at least never roll with Strength or Intelligence. Any bonus skill damage will be tuned to Monk skills as well.

This Spirit Stone has no legendary affix and is one of the few items in the game with 4 inherent primary affixes, thus leaving zero room for any random primary affixes. This item is very seldom used by end game characters, and most of the Stones in use have seen the Area Damage enchanted into much more valuable Critical hit Chance.

Several examples of this item can be seen below. View more samples of the Bezoar Stone via DiabloNut's armory. 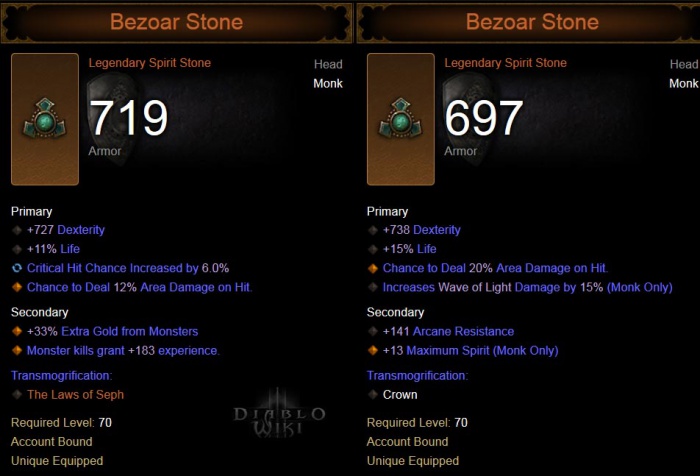 In history, a Bezoar Stone was an object thought to have magical powers to cure or neutralize any poison. The root word comes from Arabic for "antidote." The term was popularized in recent years when one was featured as a poison cure in Harry Potter and the Sorcerer's Stone.

It's thus fairly odd that this item in Diablo 3 has nothing to do with poison resistance. Presumably the item was named early in development and planned as an anti-poison piece of armor, but that effect got lost in development and only the now irrelevant name remains.

This item does not have a unique model or texture, using a generic Spirit Stone graphic.