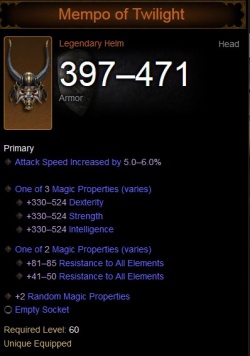 The Mempo of Twilight.

Mempo of Twilight is a legendary helm that can be found in Diablo 3 and Reaper of Souls. This item can be found and equipped by any class, though it's favored more by Wizards and Demon Hunters, who appreciate the Attack Speed bonus.

The Smart Drop system ensures that this helm will usually roll with the mainstat appropriate to the class that finds it. Helms can roll with +skill bonuses as well, and these will also usually get Smart Loot'ed to appropriate skills for your class.

This item does not have a legendary affix, and is one of the few items in Loot 2.0 with all 4 primary affixes set to inherent bonuses. Thus there is no variability in the primary affixes on this item, save for the mainstat rolling str/dex/int, depending on which class finds the item.

This was by far the best and most popular helm in Diablo 3, and a Mempo with Crit Chance was among the most expensive items in the Auction House. (Or not in the AH, since they generally commanded prices well above the two billion gold AH-max.) The item has the same inherent stats in Reaper of Souls, but thanks to the 4 primary/2 secondary affix caps, there's no way to get Crit Chance or vitality or a +skill affix on the helm without enchanting one of them in, which makes this no better than many other legendary helms. Most of them in use have had the All Res or socket enchanted into crit chance.

Several examples of this item can be seen below. View more samples of the Mempo of Twilight via DiabloNut's armory. 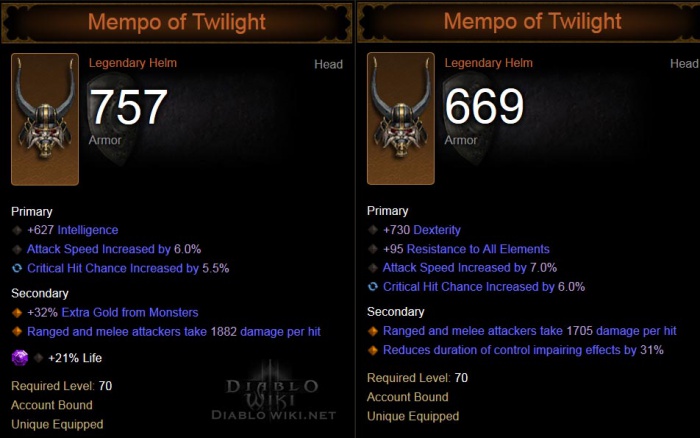