The Hellfire Ring is a legendary ring created by crafting materials obtained via the Infernal Machine event. It was added to the game in Patch v1.0.5 and serves as an end game incentive for many players. The Hellfire Ring is account bound and can not be traded, sold, or given away. It can only be earned via the Infernal Machine quest, so players who want one must find their own.

The Hellfire Ring and the entire Infernal Machine process was modified in Reaper of Souls and grew much less attractive to most players. The developers have said that improving it is on their to-do list, but it will not be fixed in Patch 2.1, though the new Hellfire Amulet was added in that version.

Creating a Hellfire Ring (db) requires multiple steps, and is a bit more difficult in Reaper of Souls than in Diablo 3. The general process is the same in both, though. Players must harvest keys from the Keywardens (3 in D3, 4 in RoS), use the Blacksmith to craft those keys into Infernal Machine plans (1 type of plan in D3, 4 different plans in RoS), and use the Infernal Machines to open portals to battle Ubers (3 in D3, 4 in RoS). Each portal of Ubers has a chance to drop Demonic Organs which players must collect (3 in D3, 4 in RoS} and then can use with the Jeweler to craft a Hellfire Ring. (Or Hellfire Amulet, in Reaper of Souls after Patch 2.1.)

See the Infernal Machine article for full, step-by-step details to all the above. 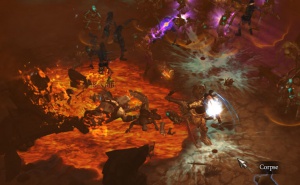 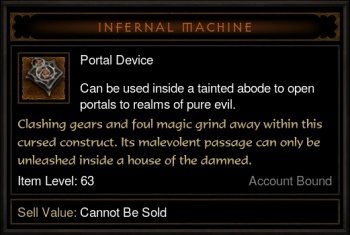 Squirt the Peddler sells the Designs that teach the Jeweler to craft Hellfire Rings. In Diablo 3 there are 4 Hellfire Rings, one for each type of attribute and each sells for two million gold. Purchase a plan and right click on it while interacting with the Jeweler to teach him that recipe. Crafting the ring costs another 50,000 gold.

There are 4 different Hellfire Ring designs in Diablo 3. They are identical except for the attribute selected.

The attribute bonus was +170-200 to one Attribute prior to the D3v2 patch and the much higher stat rolls found in Loot 2.0. That patch also introduced the 4 primary / 2 secondary limits, and Rings prior to that could roll up to 6 primary stats (or 5, on a Hellfire Ring)

There is only one Hellfire Ring design in Reaper of Souls, and the random affixes roll randomly. There are no guaranteed stats at all, not even mainstat, though Smart drop generally means that one will pop up.

The RoS Hellfire Ring proc effect is a lava pool on the ground. When the Hellfire Ring was first enabled during the RoS Beta test, the proc was a nova-like burst of fireballs.

Several examples of this item equipped on level 70 characters can be seen below. View hundreds [more samples of the Hellfire Ring] via DiabloNut's armory. 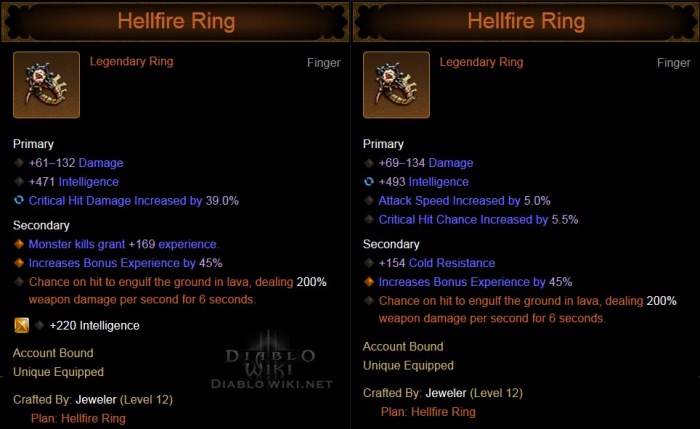 Reaper of Souls versions of the Hellfire Ring.