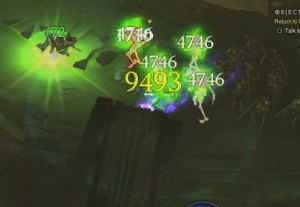 Area Damage, AD, (originally called "Splash Damage") is a 20% chance of all attacks dealing X% damage to other enemies within 10 yards. It's basically free damage dealt to other nearby targets, and it can add up to considerable damage, since it procs from every target. For instance, an attack that hits five enemies in close proximity means that all 5 will Area Damage check on each of the other four, potentially adding up to more damage than was dealt by the initial attack.

The likelihood of Area Damage can not be increased above 20%. What can be boosted, by Paragon Points and by item affixes, is the % of damage dealt per splash. A variety of item slots can grant up to 20% Area Damage each, including weapons, rings, amulets, gloves, shoulders, and off-hand items (quivers, mojos, sources), for a total possible value of well over 100%. (See maximum values below.) Paragon Points can be used to add 1% Area Damage per point, up to a maximum of 50%. This figure adds to the AD% value from items.

Despite what sounds like high potential, AD is not highly-valued by players. It underperforms due to bugs[1], and also due to the proc rate being less than 100%. Furthermore, it is of no use against single targets such as Guardians, which many buiilds find the most challenging.

This property was not very useful when first tested[2] during the Reaper of Souls Beta test, since critical hit damage was not included. At that point the AD only proced from the base damage, which made it inadequate.

This changed during testing, and when the modifier went live in D3v2 and in RoS it included critical hit damage. Thus a character with 50% Area Damage who dealt 1,000,000 damage with a crit would deal 500,000k damage to every nearby target that successfully proced the 20% chance to take AD.

AD is devastating against large groups, especially with procing with AoE attacks, since the chances for it to work increase dramatically. For instance, if an attack hits 10 enemies in a bunch, all 10 will proc AD against the other 9. Thus a single attack that hits 10 enemies would generate 90 AD checks (10 enemies x 9 AD checks each), potentially creating a much larger total amount of AD damage than the initial attack itself generated.

Maximizing AD is not generally a wise strategy, as in many item slots (especially weapons, gloves, and jewelry) other affixes (such as ChD, ChC, CDR, or mainstat) will deliver a better damage increase. After all, AD only triggers 20% of the time, and its damage is derived from the normal damage. But a good amount of AD can be quite useful, especially when fighting large groups of enemies.

The maximum possible from gear is 144% without dual wielding, or 148% with dual wielding. Up to 20% more can be added from Leoric's Crown legendary helm, for a maximum of 164% or 168% dual-wielding. Plus up to 50% from Paragon Points.